NSRWA Watershed Ecologist and MassBays South Shore Coordinator , Sara Grady, has started recording podcasts through Marshfield Community Television that will cover multiple topics related to the estuaries of the South Shore and beyond.

Sara will also be accepting ideas for future topics. Just email your ideas to sara@nsrwa.org.

Episode 9 -Ten Minutes In Nature
In this episode I talked to Patty Cuozzi, who has been volunteering to count river herring in Pembroke since 2014. We encountered some wildlife and discussed how spending ten minutes doing a herring count offers a priceless opportunity to connect with nature.

Episode 8 – Slope on a Rope – Beach Profiling with Stone Living Lab and Citizen Scientists
Sand and rocks at the beach are always moving and changing the shape of our coast, whether quickly during storms or more slowly during seasonal cycles. One simple way to track these changes is through beach profiling, where the slope of the beach is measured perpendicular to the water line. Sara spoke to Annie O’Connell from the UMass Stone Living Lab, who coordinated a volunteer beach profiling effort along the eastern Massachusetts coast, and also some of the volunteers that have been measuring the slope of Duxbury Beach on a regular basis.

Episode 7 – RiverWatch and the Joy of Volunteering
In this episode we talk to Kathy Harrington about her experiences volunteering for our Riverwatch Water Quality Monitoring Program, with a shout out to the NSRWA’s recreational guide website, exploresouthshore.org.

Episode 6 – Blue Mussels and Shore Birds: In this episode we explore the role of blue mussels in the ecology of the coast, particularly as a food source for shorebirds migrating south. Blue mussels have been declining for decades, possibly due to invasive crab predation. Sara speaks to Callie Bianchi, a local resident who helped the NSRWA test the effect of mussel size on green crab predation efficiency, and Gina Purtell, who works with shorebirds at MassAudubon.works with shorebirds at MassAudubon.

Episode 5 – Salty Roads and Salty Streams: In this episode of our watershed ecologist’s podcast, The Estuarine Gradient, Sara discusses the impact of road salt on the environment. She talks to Scituate DPW Director Kevin Cafferty and Norwell DPW Director Glenn Ferguson about how road salt application has changed over the years to save money and reduce impacts to the environment while still keeping our roads safe.

Episode 3 – Bringing the Fish Back to Town Brook: Episode three discusses the restoration of Town Brook. Over the past 16 years the Town of Plymouth has worked with local, state, and federal partners to systematically remove dams and improve fish passage in Town Brook, which runs through the center of town. The final dam on Town Brook, Holmes Dam, is in the process of being removed, which will open up passage for river herring and eels from Cape Cod Bay to Billington Sea. In this episode, Sara talks to David Gould, Director of Plymouth’s Department of Marine and Environmental Affairs and Nick Wildman, Ecological Restoration Specialist from the Massachusetts Division of Ecological Restoration, about the Holmes Dam removal and the restoration of Town Brook as a whole. Read more at NOAA Fisheries.

Episode 2 – Sea Monsters: In the second Halloween-themed podcast “Sea Monsters” Sara and special guest Niels-Viggo Hobbs discuss mythological creatures, marine animals that are stranger than fiction, and the role of the ocean and it’s inhabitants in fueling fear in horror and sci-fi!

Episode 1 – Water Cycles: The introductory episode of “The Estuarine Gradient” covers basic estuarine vocabulary, the water cycle, drought and streamflow, stormwater pollution, and answers the question “What is up with those algal blooms in Florida?” Come for the review of some basic knowledge, stay for the “limiting nutrient” chocolate chip cookies. 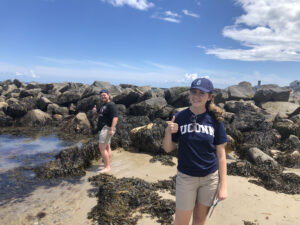