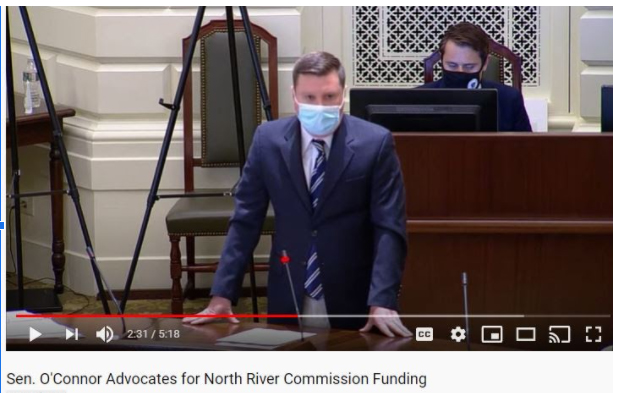 Recently Governor Baker passed the state budget and in that budget was a $50,000 line item earmarked for the North River Commission to continue its work to implement the Scenic River Protective Order on the North River. The North River Scenic Protective Order was left without a budget in June of 2020 and it was only because you spoke out that the Governor reinstated it last October. This spring, again with your phone calls, emails, and vocal support, Senator Patrick O’Connor was able to make the case for funding this important work to protect the North River. Watch Senator O’Connor’s impassioned speech on the Senate floor during budget debates.

The state legislature agreed with Senator O’Connor and his co-sponsors Senators Moran and Brady. We all waited to see if the Governor would support the funding as well and he did and the budget passed last week.

While we celebrate this win, we remain concerned that the Department of Conservation and Recreation will continue to insist that an earmark be passed every year in order to fund the implementation of this order. What a waste of precious resources! The NSRWA and the North River Commission will continue to advocate for the North River funding to be in the annual operating budget of the Department of Conservation and Recreation. Stay tuned for opportunities to make your voice heard again!

The first in-person Zoning Board of Appeals hearing for the proposed River Marsh 40B is scheduled for next Tuesday, August 3, 2021 at 7 pm at the Pembroke Library. Make your concerns known by attending the public hearing. All documents regarding the proposal can be found at the town of Pembroke’s website. The NSRWA has provided written comments and spoke at public hearings regarding impacts to the health of the North River.

There have been some modifications to the plans in an attempt to address them. The original plans included the crossing and filling of wetlands that are hydrologically connected if not part of an adjacent vernal pool. The wastewater treatment system has been moved to avoid the wetland filling. The project has also been moved outside of the 300 ft. jurisdiction of the North River Scenic Corridor, as such it will not be reviewed by the North River Commission. We are reviewing the most recent filings from the proponent and will provide comments at Tuesday’s meeting. We hope you will attend and ensure that your concerns are placed on the public record.