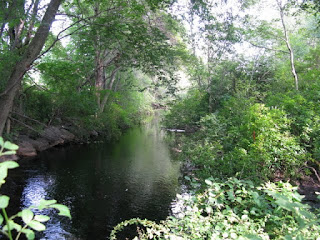 A view of the South River in the proposed park. Photo courtesy of NSRWA.

Ten years ago, Marshfield was one of the first towns on the South Shore to pass the Community Preservation Act (CPA). CPA enables cities and towns to set aside money for specific projects: namely, the purchase of open space lands, the creation of affordable housing and recreation opportunities, and the preservation of historic sites. The funds come from a surcharge of up to 3% on property taxes, and are matched by the state of Massachusetts. CPA is an excellent way to enrich a town’s quality of life, curb overdevelopment, and bring financial support to important community projects.

Now that Marshfield has been collecting CPA funds for a full decade, there is much to celebrate. Historic sites where preservation or restoration projects have taken place include the Daniel Webster Estate, Clift Rogers Library, the 1835 Marcia Thomas House, Hatch Mill, the GAR Hall, the Winslow House, and the Seth Ventress Building – plus Veteran’s Park, the Korean War Veterans Honor Roll, and Fire Station #2. Recreation accomplishments include improvements at the Uncle Bud Skate Park and Coast Guard Hill, as well as a Trails & Ways Committee mapping project. In the realm of affordable housing, improvements include an affordable housing plan and coordinator, and conversions of several existing residences.

Perhaps Marshfield’s greatest CPA accomplishment, however, is setting aside more than 100 acres of open space. In a town that continues to undergo commercial, industrial and residential development, it is essential that some land be saved. In the past decade, Marshfield has developed an Open Space Plan, and has acquired sizable land parcels on Union Street (the Little and Messer Conservation Areas) and Plain Street (the Ellis Preserve), among others. Now in progress is the creation of the South River Park, on Ocean Street, right in the heart of the downtown.

Our local environmental organizations are gathering together this spring to celebrate the Town of Marshfield’s many CPA-related accomplishments. The North and South Rivers Watershed Association (NSRWA), the Wildlands Trust of Southeastern Massachusetts, Mass Audubon South Shore, and The Trustees of Reservations (TTOR) will co-sponsor a series of walks on some of Marshfield newly-acquired public lands. The public is invited! Go, and see for yourself what the Community Preservation Act has done.

• Easter Egg Hunt at the Ellis Preserve – Saturday, April 3rd, 11 am. Bring the family and kids to find Easter eggs, some painted by North River Arts Society artists. The parcel is approximately 28 acres, protected in 2006 using CPA funds. It has a cranberry bog, a pond and a forest of oak and white pine and protects drinking water wells and the South River. Wildlands Trust holds the conservation restriction and its staff will lead this walk. Park on Sandy Hill Road (off Route 139) next to the preserve in Marshfield.

• Maryland Street Conservation Area on the North River – Sunday, April 11th, 1 pm. This 17-acre parcel abutting the North River marshes and The Trustees’ 68-acre Two Mile Farm is a real gem! Protected at town meeting just last fall, this the first time that it will be open to the public for walking. Join NSRWA and TTOR staff to walk original cart paths and explore this new addition to Marshfield’s conservation lands. Meet at the Two Mile Farm parking lot on Union Street, Marshfield.

• Little’s Conservation Area, 915 Union Street – Sunday, April 18th, 1 pm. This lovely 25-acre parcel was protected in 2008 and abuts other areas conserved privately. The parcel is mostly upland with vibrant green ferns and a nice walking path. There is a small parking lot at 915 Union Street, Marshfield. Mass Audubon South Shore Sanctuary staff will lead this walk; a reception will be held at a neighbor’s afterwards with light refreshments.

• Site of Proposed South River Park (formerly Buckles and Boards), 2148 Ocean Street (Rte 139) – Sunday, April 25th, 1 pm. Come look at the site of the future (we hope) South River Park! The South River Park Working Group members, including the NSRWA, will be on hand to show the existing site and the proposed park drawings as well as to discuss opportunities for extending the greenway and a future walking trail along the South River.