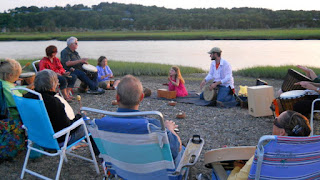 For more than a year now, my mother has participated in a twice-monthly drum circle, led by Alex Pevzner, at the Porcello Gallery in Marshfield. The size of the group varies. It generally includes men and women ages 30-ish to 70-ish, with drumming experience ranging from novice to professional. Alex and some of the others bring extra instruments so that those without can still play along.

These are hand drums, for the most part – not the snare/tom tom/bass set-up you see in rock bands. Think of tribal drums and native cultures.

June 21 was the solstice, the longest day of the year and the beginning of summer here in the northern hemisphere. My mother wanted to celebrate this important day in the season cycle, so she asked Alex to co-host a special drum circle, this time in a different location. In honor of the solstice, the gathering would take place in the Rexhame Dunes, right on the banks of the South River. Since the circle would begin at 7pm, the group would be able to watch the sun set over the water.

It was a perfect summer evening — comfortable but not too warm; with a light breeze and only a touch of humidity. And miraculously, there were no bugs (‘til the very end, after sunset, when the no-see-ums arrived). The participants brought beach chairs of blankets. They gathered first in a circle, and then in two concentric circles, with Alex at the head. Alex introduced a drumbeat, and the others joined in, on their own drums and on other percussion instruments.

Drumming, especially with a group, evokes a primal energy. It helps you feel connected with the others in the circle, with the landscape around you, with the cycles of time and of the seasons. I went into the circle expecting just to relax, sit back and enjoy the rhythms. Instead, I found the experience to be both meditative and inspiring, evoking all sorts of insights.

And my son! At my mother’s request I brought Abel along, expecting that he would last about 20 minutes. At age five, so close to bedtime, I didn’t expect him to have much interest in the drumming. But I was so wrong! Abel has spent a lot of time experimenting with my mother’s collection of drums, rattles, and chimes. He loves to perform for the family, and recently announced the formation of his own, band, “The Marshfield Rocks.” Well, Abel sat down in the circle, selected a drum, and joined right in on the rhythm. There were moments where he wasn’t in sync with the rest of the group, but for the most part, he found the beat, and played along well. I was amazed at how easily he could follow the rhythm (a skill many adults lack). There were other children in the circle – Alex’s son and daughter, plus a couple of other families with girls ranging from ages three to ten. They all seemed to be enjoying themselves, just as much as the adults.

Over the course of two hours, the group grew from an initial circle of 15, to close to 40 participants. A couple who had been strolling through the dunes between Rexhame and Humarock stood at a distance, just listening, but eventually, were coaxed closer and handed instruments of their own. A few individuals who had been walking on the beach wandered over and joined in. There was a strong sense of unity, of community, even though each person was there for his or her own personal reasons. A visible ripple of gratitude passed through the group when it was announced that a soldier just back from serving in Iraq had joined us.

And the setting! The tide was going out, and so the river, flowing slowly by, provided a sense of serenity. The salt marsh, still the vibrant green of late June, danced in the gentle breeze. And the sun — first gold, then orange-red, then pink – set in a gradual yet majestic way in the western sky. Beautiful.

In his new book, The Nature Principle, Richard Louv (who wrote The Last Child in the Woods and coined the phrase Nature Deficit Disorder), discusses the connections between creativity, mental acuity, and spending time in nature. Studies indicate that time spent in the natural world can restore attention, help us recover from mental fatigue, and reduce such anti-productive qualities as irritability, impatience, impulsivity and distractibility. Plus, being outdoors in a natural setting can restore and stimulate the brain, actually creating new neurons.

You don’t have to know the science to understand why being outdoors is good for you. After all, for most people, it just makes us feel better.

To honor the solstice, this group of drummers brought their circle outdoors, to the banks of the South River. The new setting created a sense of global connection: the drumbeats resonated off the water and the stones and sand at our feet; the rhythms pulsed out in all directions, upstream and down, and across the dunes to the ocean. In that remote corner of Marshfield, we felt as if we were part of an earth-wide ritual, gathering to celebrate this stillpoint in the solar year, acknowledging our place in the natural world. 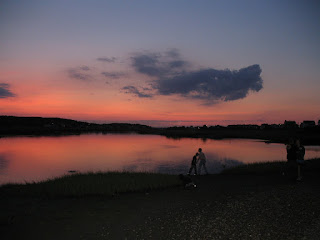 Kezia Bacon-Bernstein’s articles appear courtesy of the North and South Rivers Watershed Association, a local non-profit organization devoted to the preservation, restoration, maintenance and conservation of the North and South Rivers and their watershed. For membership information and a copy of their latest newsletter, contact NSRWA at (781) 659-8168 or visit www.nsrwa.org. To browse 15 years of Nature (Human and Otherwise) columns, visit http://keziabaconbernstein.blogspot.com.