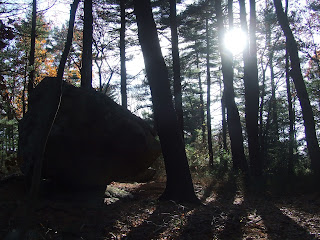 –>
Consider your routines. On the roads you travel with some regularity, are there places you’ve always intended to stop, but never have? Do you pass signs for parks and conservation lands, little dirt parking areas that give no indication as to what might be down the paths leading away from them? The South Shore is home to many places such as these. Some small, some large – all offer a worthwhile diversion.

Years ago I had a part-time job in Cohasset Village. If I happened to be heading north after work, I almost always left town via Main Street, where I would pass, but never stop at, Wheelwright Park. The large wooden sign over the entrance indicated that the site had some significance, but somehow I never got around to exploring it.
I’m making an effort lately to visit conservation areas like these – parcels I pass while riding my bike, or at night, or when I’m heading someplace else. Now I’m going back – on purpose, during the day, when I have time to see what there is to see.
Wheelwright Park in Cohasset is the gateway to a set of interconnected open space areas. The parking lot, at the end of a gravel drive, offers immediate access to the park itself, as well as the Barnes Wildlife Sanctuary. There is also a Boy Scout campground within hiking distance, a skating pond, a picnic area, and the large and diverse parcel known as the Cornelia & Richardson White Woods, which is part of Holly Hill Farm. Some of the trails, originally put in place by the WPA, date back to 1935.
Altogether the parcels comprise more than 200 acres of open space – a little bit of meadow, but mostly pine and oak woods, along with groves of holly. I visited recently with a friend and her dogs, on a sunny Sunday afternoon. Leashes are required in the parking lot, but otherwise, dogs are permitted to run free, as long as they are kept under control. Trooper and Little Foot enjoyed our visit immensely. We encountered a number of other dogs on our route, most off-leash.
First we followed the main trail, a wide cart path that winds its way to the second entrance, at Forest Avenue. Along the way were occasional giant boulders – glacial erratics – large enough to make me stop and think about how they got there. The boulders, which have been in place far longer than any manmade structure, remind me that great sheets of ice once covered the land. It was the receding of these glaciers that carved our present landscape — the hills and valleys, the riverbeds and ponds. The glaciers also dropped the occasional boulder . . . thus in Wheelwright and its environs you’ll find such behemoths as Big Tippling Rock, Little Tippling Rock, Split Rock, and the Devil’s Chair.
The cart path traverses hilly terrain – not too steep, but enough to get one’s heart pumping. There are also assorted, narrower trails that lead off in either direction. After following the main trail all the way to Forest Avenue, we backtracked to the signs that marked the entrance to White Woods. I wished we’d brought a map – there were so many options! Instead we followed our instincts and enjoyed several additional, well-marked trails, some that traversed small streams.
Like most nature parcels, Wheelwright Park is open from dawn to dusk, year-round. There is no charge for admission. Look for the entrance off North Main Street in Cohasset. Dogs and horses are welcome.
by Kezia Bacon
November 2012
Kezia Bacon’s articles appear courtesy of the North and South Rivers Watershed Association, a local non-profit organization devoted to the preservation, restoration, maintenance and conservation of the North and South Rivers and their watershed. For membership information and a copy of their latest newsletter, contact NSRWA at (781) 659-8168 or visit www.nsrwa.org. To browse 15 years of Nature (Human and Otherwise) columns, visit http://keziabaconbernstein.blogspot.com