–> I was asked recently for some suggestions for nature walks near Marshfield Center, and was somewhat taken aback at how many there are, within a small radius. There’s the Bridle Path, accessible from the CVS on Ocean Street; and just across the South River, the Pratt Preserve. A mile from there is Pudding Hill Reservation, which overlooks the town center and Chandler Pond. Two miles in the other direction is Mass Audubon’s much-loved Daniel Webster Sanctuary. Around the corner from there is the Hoyt-Hall Preserve, which links directly to conservation land along the Old Colony Railroad. And that’s not all! The Town of Marshfield also manages the little-known conservation parcel, Webster’s Wilderness.

The 130-acre Webster’s Wilderness Conservation Area is part of the 1200 acres that US Senator and two-time Secretary of State Daniel Webster owned in the 1800s. It is not the easiest place to find. If you drive down the access road to the Marshfield Senior Center (230 Webster Street), all the way to the rear-most parking lot, you’ll find yourself on a rise overlooking the Wheeler Baseball Complex. The ballfields are encircled by a paved 1/3-mile walking trail. Looking across, to approximately 10 o’clock, is where you’ll find the unmarked trailhead for Webster’s Wilderness.

From the trailhead, it’s just a short walk to a somewhat wider path. This is the Old Pilgrim Trail, a historic road that originally extended from Plymouth to Scituate. But only a small section of the Pilgrim Trail passes through Webster’s Wilderness. Turning left at this intersection, you will soon arrive at Cherry Hill, and continuing a bit farther, you’ll come out to Arborway and the Daniel Webster Estate.

I headed first to Cherry Hill, a spot I’d heard about, but had never seen.  According to Marshfield: A Town of Villages 1640-1990, by Cynthia Krusell and Betty Bates, Cherry Hill is the spot where Daniel Webster gave his last public speech. He had returned from Washington to his home in Marshfield in the summer of 1852.
His health failed shortly thereafter, and he passed away on October 24th. It’s a proud piece of local lore that Webster requested to be interred at the nearby Winslow Burying Ground, and therefore declined a state funeral and burial in the National Cemetery. Mourners traveled along the Old Pilgrim Trail (also known as Green Harbor Path) to attend the funeral service at his estate, or sailed upstream from the Atlantic to his wharf on the Green Harbor River. It’s fascinating to imagine how these old roads and waterways were the highways of yesteryear.
Daniel Webster’s home was inhabited by his extended family until it burned down in 1878. It was rebuilt on its original foundation, and in 1884, a man named Walton Hall purchased the property. Hall developed much of the surrounding land as cranberry bogs. Those bogs are long gone now, but you can find vestiges of them as you explore the trails of Webster’s Wilderness. Especially on the Cherry Hill side of the property, there are small ponds and a number of narrow streams, once part of the farm’s irrigation system. There are also culverts and dams, and occasional rusted remains of pipes and pumps.
The property’s more recent history is evident as well. 1950 marked the founding of Camp Daniel Webster, a summer day camp for children, first operated by Vincent Cohee, and later (1966-86) by James and Phyllis Anderson. I attended Camp Daniel Webster briefly in the 1980s, but most of my memories of it had faded. However after climbing Cherry Hill, I came upon the pond on which we developed our rowboating skills, and soon after, the spot where we practiced our riflery. Oh, the nostalgia! Probably the most memorable landmark was the tree on which decades of young teens had carved their initials.
After exploring a few trails that led to dead ends or private property, I backtracked to the place where the entrance path intersects with the Old Pilgrim Trail. Heading in the other direction this time led me into the heart of Webster’s Wilderness. I had my map, but I wasn’t always sure which trails I was on . . . Basically there are two intersecting figure-8s, some more developed than others, plus the occasional spur trail. There are streams and small ponds too, as well as a vernal pool. Some of the trails are overgrown in places with briers, but – especially with the map you can download from the town website – it’s easy enough to find your way around.
If you’d like to take a walk in the woods, and are in the mood for some adventure, Webster’s Wilderness might be worth your time. It’s a little gloomy in places, and feels more remote than many of our other, more trafficked conservation lands. But that’s part of the appeal.
Plus if you’re interested in local history, you’d probably enjoy the rusty old farm equipment that can be seen now and then along the trails. 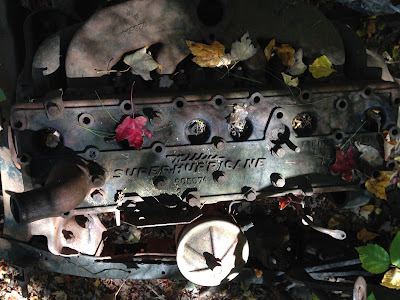 by Kezia Bacon, October 2017
Kezia Bacon’s articles appear courtesy of the North and South Rivers Watershed Association, a local non-profit organization devoted to protecting our waters. For membership information and a copy of their latest newsletter, contact NSRWA at (781) 659-8168 or visit www.nsrwa.org. To browse 20 years of nature columns, visit http://keziabaconbernstein.blogspot.com