Marshfield is one of those towns where it isn’t always easy to get from Point A to Point B. The presence of four tidal rivers as well as a significant amount of conservation land can make crossing town an indirect endeavor. There is simply a lot of territory – salt marsh, woods, wetlands – that when traveling by car, we have to go around. We get used to it. We drive the roads and don’t really think about what lies between our starting point and our destination. Until we look at a map and see that – for example – Rexhame Beach and Humarock are only a stone’s throw apart (via the Rexhame Dunes).

I’m following my dad’s footsteps and becoming a long distance runner. It’s a great way to experience the town. Moving at 5 miles per hour offers a very different perspective from what I can see in a car or on a bike. As my training runs grow longer, I’m compelled to seek alternate routes — to keep things interesting. Sometimes this leads to discoveries or re-discoveries. This past month I remembered the Bridle Trail, something I’ve known about for decades but barely ever utilized. It turns out it’s a quick way to get from one side of town to the other. How could I have forgotten?
If you want to drive from the center of town to Marshfield Hills, your best option is to follow Route 3A, which crosses the South River and then winds around the Carolina Hill conservation area, eventually crossing the North River as well. But if you’re traveling on foot, or on a bicycle that can handle unpaved paths, there is a short cut. You can pick up a trail directly behind the CVS on Ocean Street. Heading north, you soon cross the South River via the Keville Footbridge, and then a quarter mile farther, you reach South River Street. Keep going, and about 2.5 miles and two additional road crossings (Clay Pit Road, Ferry Street) later, you’re at Pinehurst Road and Summer Street. This is the Bridle Trail, named as such because some wise citizens years ago deemed that it should remain open to equestrian access in perpetuity.
Much of the Bridle Trail is wide and evenly graded. It runs along what used to be a railroad bed and is predominantly flat, bordered primarily by woods. There are sections that are narrower, and here and there you need to watch your step, but for the most part it’s an easy, quiet trail through the heart of Marshfield.
In the Town Of Marshfield’s report, “Promoting Connection and Protection: A Comprehensive Trails Plan,” which was published last year, the Bridle Trail is likened to a “spine stitching together many of the other trail system(s), open spaces and neighborhoods,” and cited as “the most important existing trail resource in town.” Not only is it easily accessible to walkers, runners, mountain bikers and horseback riders, it provides connections among our commercial, residential and recreational areas.

The report outlines some proposed improvements to the trail, to promote safety and accessibility. Grading, brush clearing, signage and benches are the baseline recommendations. Further considerations would be widening and (partial) paving to accommodate wheelchairs, road bikes, inline skates and strollers. Having experienced similar trails in other parts of Massachusetts (see previous articles on the Cape Cod and Mass Central Rail Trails), I’m excited about these prospects, even though I know that significant funding and permitting hurdles exist.

The railroad first came to Marshfield in 1870. The Duxbury and Cohasset Railroad contracted with the South Shore Railroad Company and later the Old Colony Railroad Company to create the infrastructure and run the operation. In 1893 it merged with the New York, New Haven and Hartford Railroad. The final train passed through in May 1939. Decades later, Marshfield established the railroad bed as its Bridle Trail.

Technically, the Bridle Trail extends only from Pinehurst Road to South River Street.


It runs along the base of Carolina Hill and emerges at Ferry Street.

But that’s not all! There’s plenty more. Where the Bridle Trail ends, the Rail Trail begins. Although it runs along the same former railroad bed, the portion of the trail south of South River Street doesn’t have the same “grandfathered” equestrian access and thus is known simply as The Rail Trail.

The Rail Trail continues from South River Street, across the South River via the Keville Footbridge, to the parking lot between CVS and Dandelion Park on Ocean Street.

While you can observe sections of this section of the railroad bed in the woods and between houses — especially on a snowy winter day — private homes and paved roads break up the trail, and it is so overgrown in places that passage is nearly impossible. Since it crosses private property, I’m also not sure if it’s legal to walk there. (Probably not.)

This image confounded and captivated me when I first discovered it. It was described as “the intersection of Webster and Ohio Streets,” . . . but that’s not quite accurate. The photo looks north. You can see the still-extant Freight House building in the background. From 1870 to 1940, at Parsonage Street, Webster Street was diverted up a manmade incline to cross over the railroad tracks. So in this photo, while you can’t actually see it, heading northward, Webster Street runs on the right side of the tracks, crosses the bridge from right to left (at Parsonage), and continues north to the left of the tracks (again, not visible in photo). Today’s Ohio Street was very likely once the section of Webster Street that connected the bridge to the road’s current course heading north.

After Parsonage Street, the railroad bed continues south. It’s pretty easy to find it — as well as a half-rotted bridge — in the woods off Webster Street. If you’re heading south, there is a trail on the right, just after the houses end, and before Webster Street crosses the Green Harbor River. The trail continues along a network of cranberry bogs and through the back yards of numerous homes in the Black Mount neighborhood. Again, this is probably private property, so you really shouldn’t go there without permission.

In the woods behind Black Mount is another sizable gap in the trail. When I was a child in the late 1970s and through the 1980s, one could still see — at least in summer when the water was low — and maybe, if you were wearing tall boots and weren’t afraid of slimy critters, continue south along the railroad bed through this section. But since then, the water level of the Green Harbor River and its wetlands has risen, and the trail is flooded to the point of invisibility.

The good news is . . . one of the proposed “Future Connections” in Marshfield’s report involves major improvements in accessibility along this stretch, in order to link it to the southern section of the Rail Trail, which extends nearly to Duxbury. I imagine boardwalks would be required. I love the thought of this!

Fortunately, there is a section of the southern-most portion of Marshfield’s Rail Trail that IS accessible to the public (and not under water). At present, you can pick up the trail again in the middle of the Black Mount neighborhood, at the intersection of Stagecoach, Steamboat and Fletcher Drives. (Look for the large metal gate at the trailhead.) 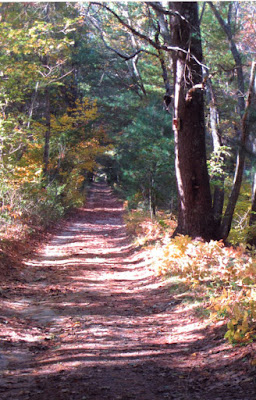 Like the Bridle Trail, it’s a wide, mostly-flat path through the woods. 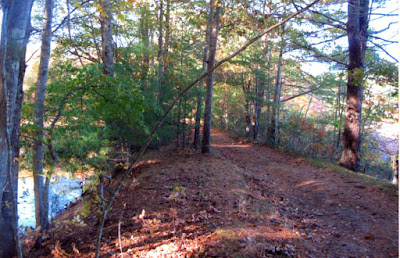 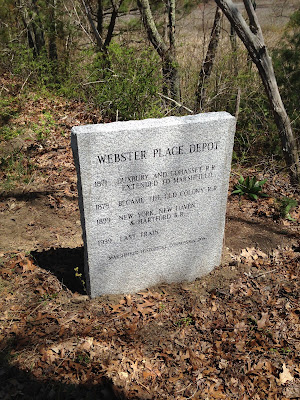 Along the way, there are several junctions with additional trails – leading through Crowder’s Woodlot and into the Hoyt-Hall Preserve – plus the historic Pilgrim Trail that once extended to Rexhame, Humarock and Scituate. 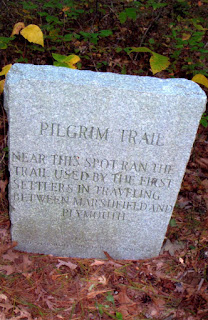 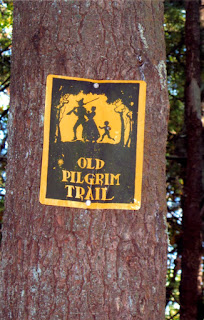 If you’d like to visit the Bridle and Rail Trails, and you’re not traveling on foot, it’s important to know where to park. Official parking for the Bridle Trail is on Ferry Street, where there is room for several cars in an unpaved area just off the road. None of the other trailheads offer parking per se, but there is room for a car or two along the roadsides at Pinehurst, South Point and Stagecoach, as well as at the utility substation on South River Street. Commercial parking in the center of town is another option.

Trail maps and other important information for both of these trail systems is available on the Marshfield Conservation website http://www.marshfield-ma.gov/conservation-commission/pages/conservation-land-trail-maps

by Kezia Bacon
May 2017
Kezia Bacon’s articles appear courtesy of the North and South Rivers Watershed Association, a local non-profit organization devoted to the preservation, restoration, maintenance and conservation of the North and South Rivers and their watershed. For membership information and a copy of their latest newsletter, contact NSRWA at (781) 659-8168 or visit www.nsrwa.org. To browse 20 years of nature columns, visit http://keziabaconbernstein.blogspot.com