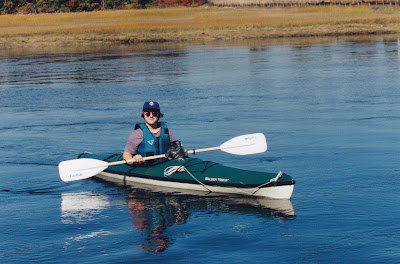 It’s early October, a Sunday morning, and I am paddling my kayak in a narrow creek near the mouth of the North River. The tide is high, buoying me up so that I can see far across the estuary. The woods of Marshfield Hills, with foliage just beginning to turn, provide a colorful backdrop. Meadows of golden marsh grass surround me.

It’s a crisp, clear day, and the sun shines through the water, illuminating the creek’s gray-brown muddy bottom and sides. Green crabs scuttle below. Seagulls soar and dive in the distance. There is a light breeze, but in this extensive network of creeks, its effect is faint. The world around me is still. It’s a perfect autumn day on the river. . . except for one thing: I’m in a rotten mood.

When my life gets more busy than I can stand, often the only thing that will help me feel better is an escape to the river with my kayak. On the river, out of reach of my desk, my phone, and nearly all of my responsibilities, I find that my mind grows clear. As I paddle along, the trivial details fall by the wayside, and what’s important rises to the foreground. Getting some distance from my routines and rituals helps me to gain perspective. It takes some time to find my bearings — both in the boat and within myself — but after a while, I begin to feel calmer, more at ease. After an hour or two alone on the water, I inevitably feel better.

It is at these times especially that I enjoy the tidal creeks. In the creeks — whether its Cove Creek, or Dwelley’s, or Macombers on the North River, or Branch Creek, or Broad, or Little’s on the South — my world seems a lot more peaceful. The wind is generally mild, there is rarely another boater, and in the two hours on either side of high tide when the creeks are navigable, I don’t have to think about the current. In a narrow creek channel bordered by tall grass, my only concern is whether I paddle upstream or down.

This morning I am by myself, but I am not alone. I have chosen to be the sweep boat in a group of thirty kayakers and canoeists. My job is to make sure that no one is left behind. A disadvantage of the job is that I must watch carefully to make sure no one takes an inadvertent detour as we wind our way through this maze of creeks. The advantage is that with no one behind me, I can slow down and separate myself from the rest of the group. If I wish, I can have a small section of the river to myself. That’s just what I need this morning. I don’t want to deal with other people.

Today we launched our boats from the inside of Damon’s Point and fought the incoming tide through the abutments of the old railroad bridge, heading downstream, hugging the southern bank. Rather than paddling toward the mouth of the river, we turned almost immediately into the salt marshes, and traversed some small, unnamed channels en route to the wider, more navigable Macombers Creek. The corners were tight at times, requiring skill with the paddle and deep reserves of patience. Even the most experienced kayakers found themselves in the occasional snag.

But now we have emerged into a clearing of sorts, where those of us with binoculars are observing a whimbrel frolicking in the grass. I have neither the binoculars nor the interest in waterfowl to justify such prolonged study of this bird this morning. I’m hanging at the back of the group, growing impatient because the more time the group spends with this rare (for our region) sighting, the longer it will be before I find a bathroom. Instead, I spend my time sulking.

When I awoke this morning, the last thing I wanted to do was kayak. With a dull headache and an upset stomach, I had trouble mustering the enthusiasm even to get out from under the covers. There was frost on the lawn, and I knew that in order to keep warm on the water, I’d have to wear my wetsuit, which — although effective in maintaining my body temperature — is uncomfortable and inconvenient. What I wanted more than anything else was to stay in bed and get a few more hours of sleep. But I had promised to be there for the kayak trip, and I wouldn’t go back on my promise.

I had anticipated such foot-dragging, and had thus done as much preparation as possible the night before. My snacks and water bottles were waiting for me, my gear was packed, my kayak was already on the roof of the car. Grumbling all the while, I made breakfast, put on extra layers of polarfleece and polypropylene, and headed off toward Damon’s Point.

Once I arrived at the launch site, there were things to attend to — unloading boats, answering questions, shuttling cars to Humarock. I was so busy helping others that I forgot about my reluctance to be on the river. But once all the work was done and it was time to launch the boats, I remembered that I didn’t want to be there. Stepping into my kayak, the wind seemed too chilly, the water too cold. For the first time in years, I felt wobbly in the boat — like I might lose my balance and tumble into the river. Still, I had agreed to be the sweep. I gritted my teeth and dipped my paddle into the water.

About a month ago, in Boston, I saw a baseball cap with “Life is Good” emblazoned upon it. I smiled as I read the words, and thought, “Yes it is.” But the woman who was wearing the cap seemed stressed out. Her brow was furrowed; she was frowning, lost in thought. At first it struck me as a contradiction. But later on it made more sense.

As far as I’m concerned, Life IS good. The work I do, the people I know, and the way I feel are constant reminders of that. But even a good life can be stressful. Even when everything seems to be going beautifully, there can be times when escape — or simply some time to rest and regroup — is necessary. We aren’t always able to discern when such time is needed.

One of the many hats I wear is Yoga Teacher — I lead six or seven classes each week. I’m supposed to be a poster girl for reducing stress and finding balance in one’s life, so it seems ironic to me that while I stand in front of my students, extolling the virtues honoring and caring for one’s body, mind and spirit, I still find myself melting down from stress every now and then. I try to see the humor in it, and rather than misrepresent myself as the Equilibrium Goddess, every so often I point out such contradictions to my students. It keeps me humble — reminds me that I’m human.

Now, sitting in my kayak, surrounded by the golden marsh grasses of Macombers Creek, I am musing on these contradictions. Here I am, in one of my favorite places, and rather than appreciate the beautiful scene before me, I am fussing with my foot braces. Here I am, doing the thing most likely to set my mind at ease, and instead of relaxing I am wondering how long it will be before the cramp in my left leg turns into nerve damage. Sometimes we are our own worst enemies.

Our group will spend the next two hours on the river. The deeper into the marsh we travel, the more my mood will improve. Before long we will cross the Trouant Island Cartway, and pass into Branch and then Broad Creek. We will skirt the inland edge of Hen Island, and then make a quick stop on Pine Island to eat our snacks and stretch our legs. Eventually we will find our way into the South River, a little bit upstream of Fourth Cliff. By then I will have forgotten that I was even in a bad mood to begin with.

Having avoided the dangerous cross currents and shifting sandbars of the river mouth, we will continue upstream for another half mile or so, weaving around channel markers and moored boats. Just south of the Humarock Bridge, we’ll take our boats from the water, load them back onto our cars, and head home. A little sunburnt, a little tired, I’ll pause at the river’s edge before I go, nodding in appreciation. Once again, after a morning spent paddling in the creeks, I will feel refreshed and renewed.