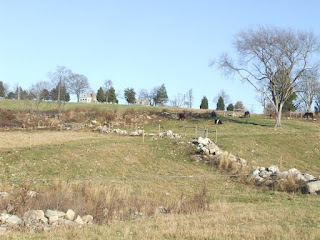 Cows graze on a hilltop pasture at Weir River Farm.

It was in the middle of our third hayride at Mass Audubon’s Daniel Webster Farm Day that it occurred to me that my son and I have been spending an awful lot of time on the farm this month. In addition to attending Farm Day, one of our annual fall rituals, we picked tomatoes, potatoes and a pumpkin at Weir River Farm’s Market Garden in Hingham, sat on tractors and took a different hayride at the South Shore Natural Science Center’s Corn Festival in Norwell, picked apples at Mounce Farm in Marshfield, and visited the cows at O’Neil Farm in Duxbury. Plus, every week we’ve stopped by Rise and Shine Farm in Marshfield to pick up our farm share (and if Abel’s lucky, dig some carrots). We are fortunate to have so many farms, so close by.

Despite its agricultural history, the South Shore can no longer be described as a farming community. There may be farmlands hidden away here and there, but to get a real feel for the wide-open fields that large agricultural enterprises require, you have to go to Plympton or Middleboro or parts of Bridgewater. This wasn’t the case 100 years ago, when farming was still a way of life around here.

Things have changed. Lands where once we raised cattle, or grain, or vegetables are now neighborhoods, strip malls, big box stores. It won’t change back. That’s why I am grateful for organizations like Mass Audubon, The Trustees of Reservations, and The Wildlands Trust for having the foresight to preserve agricultural landscapes.

It was 25 years ago that Mass Audubon purchased the 350-acre Dwyer Farm from Edward Dwyer, the last in a short line of owners that also included statesman Daniel Webster. Dwyer was ready to retire from farming, but did not want to see his land absorbed in suburban sprawl. Negotiations with the Conservation Commission had stalled, due in part to the property’s $500,000 price tag. But thanks to the tireless efforts of Dorothea Reeves and other volunteers on the Committee to Preserve Dwyer Farm, numerous fundraisers, and an anonymous $100,000 donation, Dwyer Farm was saved from development and preserved as open space for future generations. “Nature doesn’t last for us if we take it for granted,” Reeves told the Marshfield Mariner. “This is paying off some of our debt to nature.”

Since then, the Daniel Webster Wildlife Sanctuary (Winslow Cemetery Road, Marshfield) has grown to over 500 acres. With rolling green meadows, an apple orchard, and vestiges of old agricultural structures, it still has the feel of a traditional New England Farm. It is also one of the most strikingly beautiful places on the South Shore. Audubon has added two miles of walking trails, wildlife observation blinds and platforms, boardwalks through red maple swamplands, and foot bridges over the Green Harbor River to facilitate exploration. It is open year-round, dawn to dusk.

Another agricultural landscape now preserved for posterity is Weir River Farm in Hingham (Turkey Hill Lane). Managed by the Trustees of Reservations since 1999, this beautiful 75-acre property was originally a country estate, founded in the early twentieth century. Most recently, it was the home of Polly Thayer Starr, an acclaimed painter. Ten acres of fields have been left open for pasture, evoking an aura of days long past. The Weir River flows through the northwest edge of the property. There are also 60 acres of oak and red cedar woodland, and a good old-fashioned barnyard, with horses, cows, pigs, sheep, goats, chickens, and a llama.

The Trustees of Reservations have made a point to preserve the farm’s historic character while providing diverse wildlife habitat. This spring, on a hilltop field that once grew corn and winter rye, grower Cindy Prentice (with the help of hundreds of volunteers) put in a 2.5-acre Market Garden, with 90 varieties of flowers and vegetables, including 20 different kinds of sunflowers. The garden is open to the public twice a week for Pick Your Own; they also have a small farm stand. All summer long, Weir River hosts Open Barnyard on Saturdays, where visitors can meet the animals that reside there. The season culminates with the Fall Festival, with livestock viewings, live music, pony rides, pumpkins and more. Walking trails are open year-round.

Why should you visit Weir River Farm? Meghan Connolly, the property’s Education and Interpretation Coordinator, has this to say. “When people first discover the farm, they often have the same reaction: ‘a place like this exists on the South Shore?’ There is something about this place that appeals to people of all ages and backgrounds. Whether it is a five-year-old collecting eggs for the first time, an eighty year old neighbor out for his daily hike, or a volunteer with their hands in the soil of our market garden, there is a community here that everyone can be a part of.”

A third agricultural landscape now preserved for the enjoyment of future generations is the Historic O’Neil Farm in Duxbury (Autumn Ave.). By far the most recent of such acquisitions on the South Shore, the property was opened in part to the public in 2005, thanks largely to the efforts of The Wildlands Trust of Southeastern Massachusetts. It is now run by its own non-profit corporation, Historic O’Neil Farm, Inc. Conservation restrictions and an agricultural preservation restriction are in place to ensure that the farmhouse, barn and outbuildings will remain, and that the 145-acre farm will never be developed as house lots.

The farm was founded in or before 1736, and has been in the O’Neil family since 1829. Current owner Carl O’Neil, along with his brother Edward, took over day-to-day operations in the 1950s; Carl himself has been running the dairy farm for the past 30 years, selling milk to Agri-Mark, a cooperative best known for Cabot Cheese. It is possibly the last working dairy farm on the South Shore.

While O’Neil asks visitors not to disturb activities in the barnyard, there is a new walking trail on the property, and another one in progress, both of which give you a sense of the land and how it is worked. While there, you might catch a glimpse of O’Neil plowing a field or letting the cows out to pasture. Once a year, on Farm Day, the entire farm is open to the public, with hayrides, animal demonstrations, and children’s games and crafts. Private tours also may be arranged.

Besides being a fun place to bring the kids, farms like these – some working, some not – are a wonderful destination for anyone seeking a pleasant walk or the opportunity to spot some wildlife. They speak to our region’s not-so-distant history, and remind us of the importance of keeping land undeveloped and open to the public.

“Agricultural landscapes are a window to our past, the classrooms of today’s new farmers and an important piece of our food independence in the future,” says Meghan Connolly. “Even non-working farms are an important feature in defining the unique feel of Massachusetts and provide critical habitats for grassland bird species and other wildlife.”