Home / Blogs / Saquish and the Gurnet 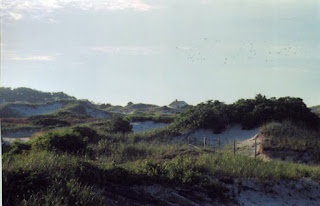 A view from Saquish Head. Photo by Sandy Bacon.

The South Shore is dotted with all sorts of hidden gems, special places, and best-kept secrets. Those in the know are often reluctant to share these places with others – because if too many people find out, they might not be special or beautiful anymore. But some of these gems are in plain sight, and accessible if you know where to go. A perfect example is the collection of hills and sand spits that run south and west from Duxbury Beach — The Gurnet and Saquish.

If you head south from the seaward side of the Powder Point Bridge, on the dirt road that runs between Duxbury Beach and Duxbury Bay, you will pass three different beach access roads, a wooded area known as High Pines, and shortly thereafter, a sign that reads “Entering Plymouth.” The road continues, now on private property. Gurnet Lighthouse rises in the distance. After checking in at a guard station, you can continue uphill into the village known as The Gurnet. From there, making a sharp turn westward, you traverse a relatively long and narrow stretch of sand, which is Saquish Neck. Continuing up onto another highland, you arrive at Saquish Head.

The Gurnet and Saquish are different from the rest of the South Shore. Most visitors agree, when you go there, it’s like traveling to an earlier, simpler world.

The drive alone is worth taking. The changing views of the bay as you head south over the often rough and rutted road are just spectacular. At times you will pass close enough to large shrubs of beach rose to smell their sweet scent. You will also see grassy sand dunes, the pebbly bay shore, yellow spikes of mullein, and stands of sumac and cedar. This year, in mid-July, after a rainy spring, the bright greens in the landscape sparkled like emeralds.

The Gurnet is a drumlin hill, as is Saquish Head and nearby Clark’s Island. All were formed 20,000 years ago – like much of our landscape –with the retreat of the Wisconsin Glacier. Saquish Head was originally an island, but over time, sand accumulated between it and the Gurnet, creating a lovely stretch of barrier beach. Although connected to the mainland in Duxbury, these villages are all part of the town of Plymouth.

The 27-acre Gurnet was named either for a fish common to Devonshire, England, or one of several headlands in the English Channel. Humans have been active on this promontory for centuries. There is ample archaeological evidence of Native American use, and records indicate a possible visit by a Viking ship around 1004. In 1605, the renowned cartographer Samuel de Champlain mapped Clark’s Island and the Gurnet. When the Plymouth Colonists arrived in 1620, they found The Gurnet to be a reliable source for pine and clams. As European settlement in the Duxbury area expanded, the Gurnet and its environs were visited frequently for lumber, fishing, salt haying, and shellfishing. The first people to purchase land there were John Doty, John Nelson and Samuel Lucas, all in 1694.

A primitive lighthouse was constructed on The Gurnet as early as 1710, and replaced with a more modern one in 1768. This twin-beacon lighthouse was the first of its kind in America, and was for a time in the late 18th century the charge of Hannah Thomas, our country’s first female lighthouse keeper. Cannonballs, fire, and erosion each plagued the lighthouse over the years, and thus it was rebuilt several times and moved back from the edge of the cliff. It was converted to solar power in 1986, and still helps to guide boats into the harbor today.

The Gurnet also played a role in our region’s martial history. In 1776, a six-cannon battery known as Fort Andrew was constructed at Gurnet Point, overlooking Plymouth Harbor. Militia from Plymouth, Duxbury and Kingston manned it throughout the Revolutionary War. A life saving station was built there in 1878. Destroyed by the Portland Gale and rebuilt, it was eventually operated by the Coast Guard and functioned until 1956. Other, now departed, features of note on The Gurnet included farms, a dance pavilion, and an inn.

Saquish has a quieter history. Its name is a variation on a Native American word for clams (which were abundant for harvest there at low tide). Champlain’s map shows Saquish Head as an island, but by 1774, it was connected to The Gurnet by a sandy barrier beach, created as a natural consequence of tides, storms and shoreline erosion farther north. Plymouth Colony sold Saquish to Ephraim and George Morton in 1690. It was probably settled first in the late 1600s or early 1700s, with farmers, fishermen and later, the occasional rum-runner. Fort Standish was constructed there during the Civil War, a small structure with a gun mounted on each of its four corners, with locals taking patrol shifts.

The prevalence of mosquitoes and the relative inaccessibility by land (prior to 1898’s Portland Gale) kept Saquish relatively unpopulated until the ditching of the salt marshes in the early 20th century and the arrival of the Jeep after World War II. Then things changed rapidly. Fifty cottages were built on Saquish during the 1950s. Today there are 52 homes on Saquish Head, 120 on Saquish Neck, and another 55 on The Gurnet. These are generally passed down within families, not sold.

All of the land on Saquish and The Gurnet is privately owned. There are no paved roads, and no public utilities (although you do see plenty of generators, propane tanks, solar collectors and rain barrels these days). The roads are alternately thick with sand traps or deeply rutted—that is, if you’re not driving directly on the beach, which is also considered a “road” of sorts. It’s a 6-mile trip from the end of the Powder Point Bridge to Saquish Head, requiring 40-60 minutes of your time.

As these are private lands, I don’t recommend visiting Saquish or The Gurnet without permission. But if you can find someone to invite you there, be sure to take advantage of the offer!