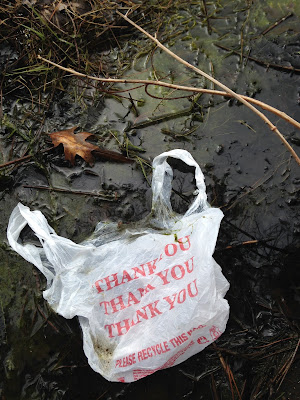 Have you heard about the colossal gyres of plastic trash in our oceans? The Great Pacific Garbage Patch, off the coast of California, is estimated to be 1-2 times the size of Texas! To date, we have not found an effective way to eradicate these monstrosities. Which unfortunately means that sea animals are dying in great numbers – about 100,000dolphins, seals, turtles, porpoises and whales per year – plus another 2 million birds – all from ingesting, or becoming entangled in, single-use plastic bags.

This sort of news makes me think twice about the disposable plastic products I use regularly – things like sandwich bags, drinking straws, and food wrap. There has to be a better way.

So let’s talk about the ubiquitous single use plastic shopping bag. Even those of us who bring our own bags to the store sometimes forget, and end up carrying our purchases home in plastic. I generally repurpose those flimsy bags for trash disposal. But even when I’ve doubled the life of a single-use bag, it still ends up in the garbage, contributing to the ongoing global problem.

One way to address this issue is at its source: to ban the use of single-use plastic bags, like they’ve done in Europe, China, and California, as well as cities like New York, Los Angeles, DC, Boston and Chicago, . . . and small towns too. Right here in Massachusetts, there are 83municipalities with restrictions on plastic bags, including Plymouth, Duxbury, and Marshfield. Pembroke and Scituate will consider town-wide bans of single use plastic bags at their Town Meetings this fall.

When I first began reading about these bans, I shrugged. How could they succeed? People are reluctant to give up their conveniences, and getting into the habit of always having a shopping bag with you is a lifestyle shift. But after delving a little deeper into the research, I now see how effective such bans can be. Here’s what I learned.

Every year, Americans discard 100 billion single use plastic bags. In Massachusetts, that’s about 51,000 plastic bags per week for the average market. These bags are our third largest source of litter, behind cigarette butts and bottle caps.

Where Do They Go Next?

What happens to these bags when we’ve discarded them? They don’t just disappear. Plastic can be recycled, but it doesn’t biodegrade. Instead, over time, it breaks down into increasingly smaller fragments, eventually into microplastics that can do grievous harm to animals, the oceans, and our environment in general.

Why Are Plastic Bags A Problem?

• From the start, single use plastic bags cause trouble. The oil or gas required to produce them, and the greenhouses gases released during production, simply do not justify their very short period of use. We’re depleting non-renewable resources in order to make bags that continue to do harm in their afterlife.

• Many communities are unable to recycle them, due to repeated issues with machinery jams. In the past, we could send our recycling materials to China, but not anymore.

• It takes 200+ years for a plastic bag deposited in a landfill to decompose. During this time it releases methane gas and carbon dioxide. If incinerated, it releases, toxic fine particles into the air.

• In the oceans, where many of these bags ultimately end up, tiny fragments of plastic are consumed inadvertently by fish and other sea animals. These toxins move up the food chain, eventually appearing — imperceptibly — in the fish we eat.

What Kinds of Bags Get Banned?

Plastic shopping bag bans are becoming increasingly popular because they significantly decrease waste while encouraging the use of more sustainable (often cloth) shopping bags. These bans don’t prohibit heavier plastic bags, nor the ones used for meat or produce, newspapers or dry cleaning. The only bags banned are the thin plastic disposable type most commonly found at grocery store checkouts.

How Can I Help?

Scituate resident Kate Glennon, who has helped bring a plastic bag ban to the town’s upcoming own Meeting Warrant, puts this all in perspective. She writes, “Now more than ever, we are seeing how small local choices, personal choices, can effect change on a larger scale. That’s how we started polluting, and that’s how we can abate the damage we’ve done. Changing our consumer habits to become less dependent on conveniences like single-use plastics creates a ripple effect visible to manufacturers and retailers, and visible in shorelines and waterways—not just in Scituate but all our interconnected communities.” Scituate’s Town Meeting takes place November 14, 2018. If you’re a Scituate resident, please vote to support the ban of single use plastic bags.

Pembroke residents have a similar opportunity, taking place at Town Meeting on October 23, 2018. In support of the ban, resident Stephanie Hagan writes, “Although a plastic bag ban could be an inconvenience to some, the economic and environmental inconveniences are greater. I believe most consumers are unaware they’re paying 4 cents a bag, built into their commodities. At 9 million bags a year in Pembroke alone, that’s over $350,000 and about $30 a year per family. . . The mere inconvenience of bringing your reusable bag or choosing paper does not outweigh the importance of this issue.”

Glennon adds, “I’m not sure anyone will miss the thin plastic grocery bags. They’re flimsy and we know they end up in the landfill by the millions, and in waterways. There’s no shortage of other thin plastic bags (like bread bags) that can be kept for household re-use.”

If you live in a town that does not presently ban these bags, you can still choose not to use them personally. You might also advocate for a ban in your own town.

Kezia Bacon’s articles appear courtesy of the North and South Rivers Watershed Association, a local non-profit organization devoted to protecting our waters. For membership information and a copy of their latest newsletter, contact NSRWA at (781) 659-8168 or visit www.nsrwa.org. To browse 20 years of nature columns, visit http://keziabaconbernstein.blogspot.com