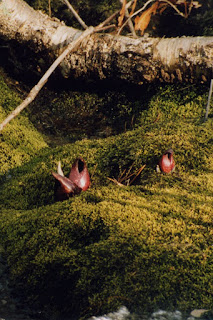 One night in early March I caught my first whiff of skunk spray in the air – a sure sign that spring is on its way.

Other than Pepé LePew and the fact that they are smelly (and can make you or your pets smelly too), I have very few associations with skunk. So I did some research to learn more about these much-maligned critters.

The skunks that live here in New England — Mephitis mephitis nigra, the striped skunk — are easy to spot. Their distinctive black and white striped fur and bushy tail make them stand out at dusk, or when your headlights flash on them while driving at night. Unlike other members of the weasel family, they are not especially agile. Their gait is wobbly, and with short legs, they move rather slowly. Perhaps that is why so many of them end up as roadkill. Generally an adult skunk measures 29-36 inches in length, tail included, and weighs 6-10 pounds. The males and female look alike, although the males are 25% larger.

Striped skunks usually make their homes in fields and woodlands, but they are just as happy to live under a porch, deck or shed. Because of their short legs, skunks don’t climb well, but they are excellent diggers. Sometimes they dig their own burrows, but more often they take over that of another animal, such as a woodchuck or fox. The burrows are from 6-20 feet long, with a round room at the end lined with leaves and grass.

Nocturnal, they rest in the burrow during the day, and search for food by night. While foraging, they usually stay within a one-mile radius – but they will go as far as five miles if they need to. Their diet consists primarily of small rodents, insects, and seasonal fruit – but they also will eat the eggs of turtles and ground-nesting birds, as well as garbage and pet food. While not true hibernators, they do tend to settle down in groups of three or four for the colder seasons, emerging only when the weather grows warmer than 30 degrees.

Here, breeding season for skunks is in February and March. Litters of two to ten are born between late April and early June. Six to eight weeks later they are ready to learn how to forage for food with their mothers (the fathers are not involved with raising the young).

While we tend to associate skunk with the stink they can make, the truth is, they spray this scent as a last resort. Skunks will spray when they sense they are in danger – but when possible, they prefer to walk away from danger altogether. If you find yourself face to face with a skunk, it is best to back away slowly. And bear in mind these warning signs. Before a skunk releases its spray, it arches its back, raises its tail, turns its back toward its target, and stomps its feet. The musk is released in a fine spray from two glands on the skunk’s rear end. It can travel a distance of 15 feet – and there is enough in the glands for 5 consecutive sprays.

Taking up residence under your deck, perhaps, or getting trapped in your garage, skunks can be a nuisance. Mass Audubon’s Living with Wildlife is an excellent resource, accessible via the website http://www.massaudubon.org/Nature_Connection/wildlife. It includes some guidelines on skunk problems and how to avoid or fix them.

Another sure (and somewhat related) sign of spring is the emergence of skunk cabbage in wetlands. In mid-March I noticed the rounded purple heads beginning to emerge in a swampy area of my back yard.

Eastern skunk cabbage, or Symplocarpus foetidus, is one of the first plants to bloom in the early spring. This foul-smelling plant produces a bulbous, mottled purple flower, about 4-6 inches tall. The flower appears to be lying in the mud, leaves or moss in which it grows because the stem and leaves do not emerge until later in the season.

The leaves are large – 15-22 inches long and 12-15 inches wide. When torn or trampled upon, they are quite smelly. The smell is not harmful to humans – and in fact it attracts pollinators such as bees and stoneflies to the plant, and helps prevent larger animals from damaging it.

Skunk and skunk cabbage – smelly when disturbed and not especially attractive — might not be among our favorite things in the natural world. But by winter’s end, it’s a joy to see them . . . some of the first signs of spring!