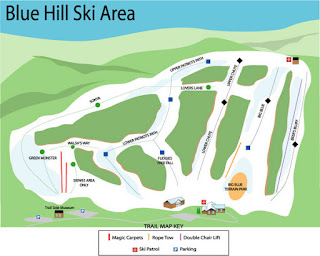 It is the middle of unseasonably warm February day, and I am standing at the top of a large hill dubbed The Green Monster, wearing a helmet, sunglasses, a waterproof jacket, snow pants, gloves and clownishly large boots. Strapped to my feet is a four and a half foot long, mock-grafitti’d wood and fiberglass board, which is – in both presence and design — a near-total anachronism for a suburban 40-year old mom. But I have decided that it is time for me to learn how to snowboard.

The Marshfield Recreation Department offers a variety of classes for adults and children alike, and paging through its brochure earlier this year, I noticed the Mountain Munchkins program for kindergarteners. The class fit perfectly into our schedule, so I asked my son Abel if he would like to try something new: a three-session course in either skiing or snowboarding. He said yes, and in late January, we began reporting to the Blue Hills Ski Area in Canton every Thursday for his 90-minute lesson.

My expectations were low. Abel has tried Music Together, Tumblefun, swim lessons, skateboard lessons, and ice skating, and while he has enjoyed all of these, I haven’t seen anything yet that approaches passion.

Until now. Of the 15 children enrolled in our timeslot, Abel was the only one who chose snowboarding, which meant that he got to have a private class! He was excited to try something new, and even more captivated as we entered the rental barn and saw the equipment. But that was nothing compared to what followed.

Abel was assigned an engaging young instructor named Alec. After explaining how to work the bindings, how to fall and get back up again, and how to “skate” with the board attached to one foot, Alec led Abel up the Magic Carpet to the top of The Green Monster, the larger of Blue Hills’ two beginner’s slopes. And before the end of the 90-minute session, my 5-year-old munchkin was gliding back and forth across the hill, practicing his “falling leaf” technique, wearing an expression of deep concentration. We knew after his second lesson that we’d be signing up for another session, and by the end of his third lesson, he was going down the hill all by himself. He loved it – and I loved watching him. (Parents are permitted to stand behind a fence at the bottom of the hill to observe.)

So if my five year old son wants to snowboard, he’s going to need someone to go with him, right? That someone will have to be me.

I’ve cross-country skied a little bit, but I’ve hit the downhill slopes a total of twice in my life, and the most recent occasion was 25 years ago. Let’s just say I was a little daunted by this snowboarding thing. But I’m in decent physical shape — how bad could it be?

Friends offered all sorts of “encouraging” comments. “Try not to tear your ACL . . . or break your wrists.” “Your rear end is gonna be sore!” “Mind if I come and watch . . . and laugh?” But I was up for the challenge. So before I could chicken out, I signed up – and paid for – my own private lesson. I opted for a weekday class, when the traffic on the mountain would be light, and I‘d be less likely to cause a collision.

My instructor, James, showed me the same basic techniques that Abel had learned, and very encouragingly told me I was doing well, even when I felt like a total dork. So we too boarded the Magic Carpet and headed up to the top of the hill.

First James taught me how to get the board moving, and walked backwards in front of me, holding my hands, while I tentatively shuffled downhill. Halfway down, he let go and I managed to maintain my balance and get to the bottom.

Thus James concluded that I was ready for the next step, the falling leaf. He explained it to me, demonstrated what I was to do next, and then there I was, very cautiously working the board from side to side down the slope, trying to get a feel for “exactly how this darn thing works.” This involved some falling, plenty of grimacing, and some comical attempts of getting back onto my feet, but overall, I was surprised that I didn’t make a total buffoon of myself.

We went up and down the hill five or six times during my lesson, and each time I had a somewhat better sense of what to do. The casual observer would report seeing flashes of terror across my face every now and then, but I’m intrigued – and challenged – enough that I want to go back and try some more. Friends have assured me that it will take a few lessons before I actually get the hang of it.

Winter isn’t over yet, and even in this super-mild version of winter that we’re experiencing this year, Blue Hills makes it own snow, and remains open for business as far into the season as the weather permits. Individuals and groups of all ages can sign up for lessons for both skiing and snowboarding. I’ve found the staff to be skilled, engaging, and fun.

More experienced skiers and snowboarders can check out the property’s 60 acres of slopes, including 12 trails and a terrain park, plus a double chair lift, two conveyor belt-type lifts and a handle tow. Blue Hills is open most nights ‘til 9, and half of the ski area has night lighting. There is a lodge with a snack bar, and a well-stocked rental barn. It’s a great place to learn something new, polish your skills, or just satisfy an itch for snow sports, especially if you don’t have time to make the trip to the larger mountains up north. I wish I had discovered this place 30 years ago!

The Blue Hills Ski Area is located at 4001 Washington Street in Canton, MA, just minutes from Route 93. It is owned by the state Department of Conservation & Recreation (DCR) and is currently managed by company that specializes in small ski resorts. Organized skiing on Great Blue Hill has been going on since at least the 1930s, when the Civilian Conservation Corps cut the first two trails there. In 1949 the Metropolitan District Commission added rope tows and some additional trails, and chair lifts were built in the 1960s. The area has been revitalized in the past decade and is an inviting place for individuals and families. Learn more at http://ski-bluehills.com.

Kezia Bacon’s articles appear courtesy of the North and South Rivers Watershed Association, a local non-profit organization devoted to the preservation, restoration, maintenance and conservation of the North and South Rivers and their watershed. For membership information and a copy of their latest newsletter, contact NSRWA at (781) 659-8168 or visit www.nsrwa.org. To browse 15 years of Nature (Human and Otherwise) columns, visit http://keziabaconbernstein.blogspot.com