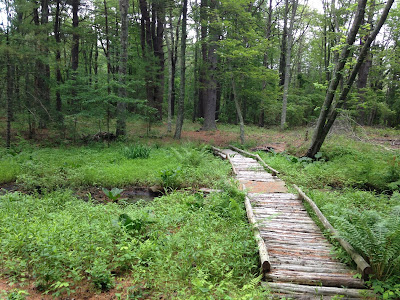 Thank you to the Town of Marshfield, which continues to support the acquisition and improvement of conservation land! Three years ago, the town acquired the 37.5-acre Pratt Property on South River Street, and this past April, funds were allocated both to create trails and bridges on the Pratt, and to construct a new canoe and kayak launch around the corner, on the South River.
This is great news! In addition to gaining a much-needed upstream access point for the South River, we are seeing the step-by-step development of a greenway around a section of the river that was once weed-choked, polluted and neglected. I wanted to understand how the various properties fit together, so one afternoon in mid-June I visited the Pratt as well as some of the South River Greenway’s other open spaces.
The Pratt Property is located at 172 South River Street. When you turn into the driveway, you’ll see an old farmhouse and barn. The trails are out back. I parked behind the barn, and surveyed the landscape, looking for a trailhead or some other indication of where to go next. Eventually I spotted a red metal arrow, affixed to a tree. From there, the trail was well-marked and easy to follow.
The path from the driveway leads through the woods toward the South River. Approaching the marsh, there is a fork. If you go to the right (west), you’ll skirt along the edge of the marsh, and across two concrete floodgates. They are no longer in use, and appear to be vestiges of the property’s agricultural history.
The Pratt Property was originally owned by one of Marshfield’s early settlers, Timothy Williamson, who operated the town “ordinary.” He purchased the land in 1663, and it stayed in his family until the mid-1800s. The house itself was constructed in 1700. Williamson’s descendants eventually sold the land to the Pratts, who kept it for another 120 years.
After the flood gates, the westbound trail passes over a small bridge, traversing one of the property’s two brooks, and then continues into the woods. It ends relatively soon thereafter, at Willow Street.
Heading back to the fork, the trail that goes to the left (east) is somewhat longer. It too crosses over a brook. It’s worth noting that both of the bridges on the property are quite eye-catching. They are constructed of tree limbs, with their bark intact, which lends the bridges not only a picturesque quality, but also some traction. I don’t mean to suggest that the bridges are unsafe in any way! They appear to be quite strong.
The eastbound trail continues through the woods as well, and eventually intersects with the Bridle Path, a former railroad bed converted to an unpaved multi-use trail, that bisects the town.
Here’s where the greenway concept comes in. If you go left (north) on the Bridle Path, you can walk (or run or bike) all the way to Summer Street in Marshfield Hills, passing along the Marshfield Fairgrounds and through the Carolina Hill conservation lands. If you go right (south), you will soon arrive at the Keville Footbridge, which passes directly over the South River and offers some lovely views.
Continuing south on the Bridle Path, you will arrive at the parking area for the Ocean Street (Route 139) CVS store. And then if you head west on 139, the very next thing you’ll see is Dandelion Park, a charming little green space that in the late 2000s replaced a dilapidated gas station.
Continuing west on Route 139, look for the Cedar Grove Cemetery. You could stay on the sidewalk along the busy highway, but if you’re not averse to graveyards, walk through this historic property and enjoy some additional river views. Eventually you will arrive at the First Congregational Church. It’s a short walk back to the Pratt Property from there – just continue west on 139 and turn right on Willow Street. After you cross the river, you can enter the property from the terminus of the first trail detailed above.
Or, if you’d like to extend your experience of the burgeoning South River Greenway, continue along Route 139 to South River Park. This 1.7-acre property, established in 2012 serves as a companion to the town’s Veterans Memorial Park, just a few hundred yards upstream. The new park features a granite tribute to Marshfield-based soldiers who served recent wars, as well as a short boardwalk to the river.
Volunteers for the North and South Rivers Watershed Association have been working within South River Park for three years now, to remove an invasive plant, Japanese Knotweed, from the banks of the river. There are also efforts underway to enhance the meadow area, and to install interpretive signage, plus more general weeding and maintenance tasks. If this is the kind of work you enjoy, please consider pitching in. Additional volunteers are welcomed with open arms. (Contact NSRWA – see below.)
It’s gratifying to see the South River Greenway coming together . . . and also exciting to look ahead! The canoe and kayak launch – scheduled for a grand opening next spring — will be a very-welcome addition to the community. Initial funding was provided via Marshfield’s Community Preservation Committee. A local non-profit – Good Will Hunters – will be hosting an additional fundraiser this fall. The South River Duck Derby (October 11) will provide funds to help enhance and maintain the canoe and kayak launch in the future.

Kezia Bacon’s articles appear courtesy of the North and South Rivers Watershed Association, a local non-profit organization devoted to the preservation, restoration, maintenance and conservation of the North and South Rivers and their watershed. For membership information and a copy of their latest newsletter, contact NSRWA at (781) 659-8168 or visit www.nsrwa.org. To browse 19 years of Nature (Human and Otherwise) columns, visit http://keziabaconbernstein.blogspot.com