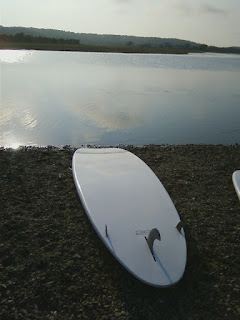 A few years ago, I was standing on the deck of the boathouse at the Norris Reservation in Norwell, gazing at the water. I saw a lone figure approaching from upstream, but I couldn’t quite determine what it was — too quiet for a boat, too tall for a kayak or canoe. As the figure approached, and I was able to see more clearly, I realized it was a man, standing on what looked like an oversized surfboard, paddling his way down the North River.
At the time, I figured this was just an instance of an Odd Activity Someone Invented. I didn’t know yet that Stand Up Paddle Boarding (SUP) was one of the latest trends for people who enjoy the water. I was intrigued.
For years the North and South Rivers Watershed Association has offered an array of guided paddling trips, classes, lectures, walks and other outdoor themed events. Lately the group has been expanding its offerings, and this year Stand Up Paddle Boarding was added to the schedule.
Partnering with Marshfield-based Luminate Surf & Skate, NSRWA offered a series of Stand Up Paddling classes in May and June, on the South River. Local, and run by folks I trusted, this was the perfect opportunity to try something new — so I signed up.
The class was just before sunset on Memorial Day. We met first at Luminate so those who needed to could be fitted for wetsuits (rental was included in the cost of the program). It was overcast, damp and a bit chilly outside.
We caravanned from there to Rexhame Beach. Luminate had trailered the boards, but it was our job to carry them, and our paddles, through the dunes to the river. Even with the built-in handle, those boards – averaging about ten feet in length — were awkward and heavy! We placed them at the water’s edge and then received a quick tutorial on how to use them.
When I signed up for the class, I’d looked online at photos of people in their bathing suits, smiling contentedly as they paddled their boards across peaceful waters. But I pictured quite a different scene for myself. It wasn’t bathing suit weather (I wore my sleeveless wetsuit with a long sleeved shirt over it). I imagined it would take some practice before I could even stand on the board, let alone smile. “Contentedly” might have to be saved for a future excursion. I expected to fall, repeatedly. But being a yoga teacher and longtime-but-still-novice kayaker, I had hopes that I would figure it out eventually.
Our guides, Jess and Oliver, instructed us to wade into the water up to our knees, cautioning us about the slippery stones underfoot. They then hopped up onto their boards, kneeling, and pushed off into the river. “Once you find your balance,” they explained, “you can bring one foot forward and stand up.”
I was a little nervous, but not wanting to be left behind, I pushed off after them, wobbling but still dry from the knees up. The board was surprisingly stable, and within a minute or two, I gingerly rose to my feet. Once we were all standing, Oliver and Jess showed us the most effective way to use the paddle. And then we set off, heading upstream.
Are you familiar with the South River? The winding stretch from Rexhame Beach upstream toward Marshfield Center is lovely. Surrounded by marsh on both sides, it offers an expansive view. The evening we were there, the tide was close to high, and the marsh grass was a rich emerald green. There was a mild breeze – just enough to keep the bugs at bay. And the mostly-still water reflected the setting sun. So serene.
Our guides led us upstream for a while, and then we turned into Clapp Creek, which flows in a zigzag pattern from a neighborhood off South River Street. By then our group of nine (a family of four, a couple, the instructors and me) had dispersed enough that each of us could have a solitary experience if we wanted to. We had chatted some while we paddled in a loose pack, but as we headed deeper into the creek, the conversations slowed.
I had to pay attention – maintaining my balance, steering the board along a winding course, making sure the paddle hit the water at the correct angle, avoiding collisions with other participants as well as the riverbanks – but the process was simple enough that I could daydream a bit as well. I’d explored this section of the river plenty of times before, but always down low, at kayak or canoe height. To be standing instead of sitting offered a refreshingly new perspective.
The creek continued to narrow, and eventually we decided to turn around. Heading back toward Rexhame, we let the distance between each paddler grow, each of us in his or her own world. Exiting the creek and heading downstream, I surveyed the scene before me: the sun setting behind Marshfield Hills, a pink-orange glow on the river, the vivid green marshes, the golden hue of the dunes. I’d tried something new, I’d enjoyed myself, and I’d managed to stay warm and dry. I’m pretty sure I was smiling contentedly.
Note: Luminate offers weekly Stand Up Paddle Boarding classes at various South Shore locations. For information, visit http://luminatesurfandskate.com or call 781-834-2755.
by Kezia Bacon
June 2012
Kezia Bacon’s articles appear courtesy of the North and South Rivers Watershed Association, a local non-profit organization devoted to the preservation, restoration, maintenance and conservation of the North and South Rivers and their watershed. For membership information and a copy of their latest newsletter, contact NSRWA at (781) 659-8168 or visit www.nsrwa.org. To browse 15 years of Nature (Human and Otherwise) columns, visit http://keziabaconbernstein.blogspot.com