NATURE by Kezia Bacon, Correspondent I decided in my early forties to learn to ski. At first it was so I could accompany my son, who was into snowboarding at the time, but he eventually decided that basketball would be his winter sport instead. Thus two or three years went by with my skis gathering […] 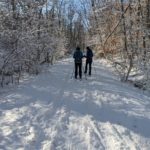 by Kezia Bacon, Correspondent There are lots of places to cross-country ski on the South Shore – so many it can feel overwhelming. If you like to ski, you probably have your favorite spot. If you’re looking for a designated ski course, take a drive and try the Weston Ski Track. But if you’re okay […]