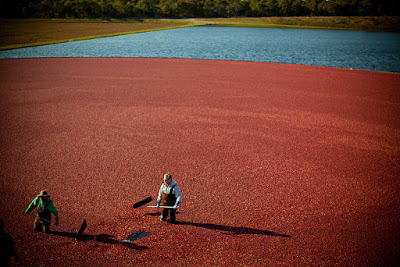 The neighborhood in Marshfield where I grew up is bordered on one side by a large system of cranberry bogs. As a teenager, I would often take long walks around the bogs – sometimes alone, sometimes with friends. I got to know the habits of the swans and Canada geese I encountered there, and explored the woods surrounding the property. It didn’t occur to me that it was private land, and that I shouldn’t be walking there without permission. The vast expanse of open space was so inviting…

In the winter, when it was cold enough and the bogs were flooded, all the neighborhood kids would go ice skating. Our mothers preferred that we skate on the bogs, and not the adjacent pond, because the bogs were shallow and thus safer. I never fell through the ice but plenty of other kids did. Skating season never seemed to last long enough. Inevitably in March, someone would risk the thinning ice and end up sinking into frigid, thigh-deep water.

Cranberry bogs are a common landscape feature here in Southeastern Massachusetts, comprising about 14,000 acres or a total of around 900 bogs. Many of these bogs have been in production for more than 100 years. Twenty eight percent of cranberries grown in the United States are from Massachusetts, but Wisconsin accounts for much more — 57%. New Jersey, Oregon and Washington also grow smaller amounts.

The Wampanoag referred to the cranberry, Vaccinium macrocarpon, as “sassamanash” or “ibimi” (bitter berry). European colonists called it the “crane-berry,” seeing the likeness of a crane’s head and neck in its blossom and stem. Eventually it became “cranberry.” In Europe, a similar variety, Vaccinium oxycoccus, is known as the lingonberry.
Cranberries require acid peat soil and lots of fresh water. These conditions often occur naturally – in kettle holes, carved and filled by the retreating glaciers with sand, peat, gravel and clay. The result is a spongy, low-lying wetland. After the commercial cranberry industry began — on Cape Cod in 1857 – numerous improvements developed. Today’s cranberry bogs include a system of ditches, flumes and ponds surrounding the growing area, to facilitate irrigation and flooding.
The cranberry growing season begins in April and ends in November. The long winter dormancy period is an important requirement in the plant’s life cycle. The berries grow on low-lying, trailing vines, similar to but hardier than those of the strawberry. Undamaged cranberry vines will survive a long time. Some on Cape Cod, still bearing fruit, are more than 150 years old.

So how does a cranberry bog work? In the winter, the bog is flooded with fresh water, to protect the plants from freezes and thaws. Every few years, a layer of sand is applied, to promote growth and slow the spread of weeds and insects. Sometimes the sand is spread over the ice of a flooded bog. Other methods include dry sanding, by hand or with a vehicle, or barge sanding, on a flooded bog.

In the spring, the water is drained off, and the plants begin to grow. Sometimes the bog is flooded again briefly in April or May, to manage insects, weeds and disease. Water is also applied via sprinkler system to protect the tender plants when there’s a threat of frost (this occurs in the fall as well). On many bogs, herbicides for weed control are applied in the spring, although some cranberry growers pull weeds by hand. In both spring and fall, to optimize the flow of water, the ditches around and between the bogs are cleared of mud and other impediments. This is generally done with a mini excavator.

As spring turns to summer, fertilizers are sometimes applied to support growth. Since cranberries do not self-pollinate, growers keep beehives on the bogs during bloom (early June through mid-July), hoping the bees will pollinate the cranberry flowers. Cranberries typically require about an inch of water per week, so if there isn’t sufficient rainfall, the bogs are irrigated, generally with a sprinkler system. Weeding and/or herbicide application continues, as does Integrated Pest Management using a variety of methods, some regulated by the state.

In the fall, beginning in mid-September, it’s harvest time. There are two basic methods of cranberry harvest – dry and wet. Dry harvesting, which comprises only 10% of the crop, involves walk-behind combing machines or self-propelled harvesters that separate the berries from the vines, which must be completely dry before harvest. The berries are collected in large burlap sacks, and eventually sold as fresh whole fruit.

Wet harvesting, far more common, involves flooding the bog once again. Growers use reels (sometimes known as “egg beaters”) to stir up the water and help separate the berries from the vines. Since cranberries have pockets of air inside them, they float to the water’s surface, where they are gathered within wooden or plastic booms and lifted or pumped onto a truck. These are made into juices, sauces, dried cranberries, and nutritional supplements.

Many years ago, a wise older friend reminded me that a cranberry bog is not necessarily land that’s open for use by the public. “It’s someone’s farm,” she said, “someone’s livelihood, and it should be treated with respect.” Many cranberry growers welcome walkers and ice skaters to their properties, as long as they do no harm. It’s always a good idea to ask first.

We are likely to have another good month or so of ice skating weather. Always make sure the ice is solid before you skate. Perhaps I’ll see you out on the bog!