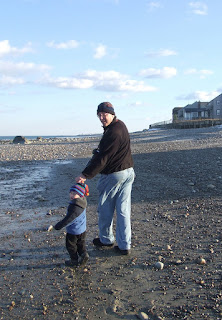 Abel and Chris Bernstein enjoy a winter stroll on Rexhame Beach in Marshfield.

This winter has been long and cold so far – and snowy. I was just beginning to wonder if I’d see bare ground again before April when that warm sunny Sunday arrived in early February and shook things up a bit. Could it be – our January thaw, only eight days off schedule?

Melted snow and ice ran in rivulets down the front steps at my parents’ house, where I was charged with snow removal duty (while they vacationed in Mexico). The snow was gone, but two inches of thick ice remained. Would it ever go away?

The wind blew so strongly that the pines shed not just twigs but small branches, smashing apart in the driveway where they fell. It was 49 degrees, warm enough to spend some time outside, but not safe to be in the woods with all that stuff falling down.

At home, I asked my son Abel, who is nearing age three, how he wanted to spend the afternoon. He began reciting the names of the toy trains he wanted to add to his collection, a sacred litany, hopeful. “And we can go today, to the store, to get them!” No, shopping was not the answer.

“I can bring my trucks! And play in the sand!”

After lunch we put on our sneakers – not our boots. It felt strange to resume contact with the bare ground, to let go of that extra layer of insulation underfoot.

“We can bring our beach chairs!”

Beach chairs . . . the warm sun . . . lounging. I feel a strong wave of envy surge and then float away. My hardworking parents, under the palm trees, alternately reading, swimming and eating. I wish we were there too, on the island, our idea of paradise. “Next year,” I assured myself. “Maybe next year.” It seems wrong even to fantasize about a tropical vacation in this economy.

Last winter was mild. We spent a lot of time outdoors, in the back yard, gathering sticks and “fishing” in the brook that skirts the edge of our property. This year is the opposite. Even on the days when it is warm enough to venture outside for more than a few minutes, the yard is iced over, encrusted with dirty snow. No wonder I feel depressed.

I don’t want to complain about the weather. I want to be outside. I want to breathe fresh air and feel the sun on my face. I don’t care if I have to wear a hat, coat, scarf, gloves — and long underwear wouldn’t be a bad idea either – I need to get out of the house. Is it Seasonal Affective Disorder? Cabin Fever? It doesn’t matter. Yes, we are going to the beach.

At Rexhame, it is colder and windier than at home. Those five miles make a difference. Climbing over the dunes, I am surprised to see snow. Even on the beach, there are patches of hard, dirty snow! But beyond it are rocks, pebbles, and because it’s low tide, a long, flat expanse of wet sand. And the ocean! Suddenly I feel like there is much more air to breathe.

My husband, my son, and I make our way toward Beadle’s Rocks. Abel wants to sit on the sand and make roads with his trucks, but the sand is too damp and so we walk instead. We tell him that we can climb on the big rocks.

It’s too late in the day for seals, but the receding tide has left all sorts of puddles. Abel wants to splash in them. How do you explain to a two year old that some days you have to step over the puddles? Instead, we pretend that the big rock is a slide, and let him go down it, again and again, as much as he wants. He still manages to get his feet wet, darting off into the puddles with a sly grin.

It’s too cold to linger, so we make our way back to the car.

On the way home, we stop at Gerard’s Turkey Farm for sandwiches and french fries, which we eat in the car, right out of the bag. It’s not a vacation, but it kind of feels like one — a much-needed change of pace and scenery, albeit brief. Maybe next week it will be warmer.

Only a few more weeks till spring!