Home / Blogs / Going to the Zoo 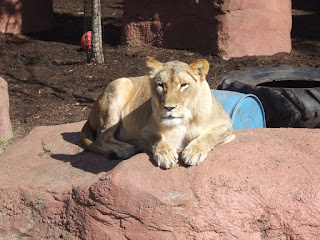 A lion at Capron Park Zoo in Attleboro, Massachusetts.

Now that spring is here, it’s time to start spending more time outdoors. We have plenty of options here on the South Shore – the beaches, the rivers, and plenty of sanctuaries, preserves and conservation areas. But perhaps you are looking for something a little different. Consider the zoo.

Until recently, it hadn’t occurred to me to visit any of our local zoos. I’ve been to some of the great ones – Washington DC, San Diego – but I think the last time I went to a zoo within a 50-mile radius more than thirty years ago.

Last spring we received a membership solicitation in the mail from Zoo New England (ZNE). If we joined, our family would be granted a year of access to both ZNE Zoos (Franklin Park and Stone Zoo), as well as their affiliates nationwide — which includes pretty much all of the other zoos in our area. We decided to try it.

First up was the Franklin Park Zoo in Dorchester. Franklin Park has enjoyed a renaissance of late. In fact, it now feels like an oasis in the middle of the inner city. The zoo itself is divided into several sections. Serengeti Crossing features ostriches, ibex, wildebeests and a herd of zebras. Franklin Farm has chickens, cows, goats, and sheep, plus rabbits, a barn owl, and a Contact Corral for the warmer months. The Children’s Zoo includes prairie dogs, the amur leopard, a duck pond, and assorted reptiles and amphibians. And the Outback Trail has emus, kangaroos, kookaburras, cockatoos, and black swans. Bird’s World and Butterfly Landing round out the offerings.

The Franklin Park Zoo is large and well-spaced. Climbing a grassy hillside, you will see giraffes, lions, tigers, bongos, and camels. A landscaped path from which one can catch a rare glimpse the “real” city beyond the zoo walls leads to the Tropical Forest, home to a family of gorillas – as well as snakes, a pygmy hippopotamus, a dwarf crocodile, various birds and small critters, tapirs, and wild dogs. The gorillas are fascinating to watch – so similar to humans in their gestures and expressions.

Throughout the zoo, there are plenty of picnic tables, restrooms and (seasonal) snack bars, plus a gift shop and a large playground. In the warmer months, the zoo also offers a carousel and a small train on which children can ride. One final highlight: the Franklin Park Zoo is also home to a peacock, but you never know where you might find him. He struts around the grounds, spreading his plumage at regular intervals.

Our next visit was to the Roger Williams Park Zoo in Providence, Rhode Island. Probably the largest in the area, this zoo is packed with attractions. Divided by geographical region, Roger Williams takes you to Africa (elephant, zebra, giraffe, cheetah, jaguar, crane, wildebeest, wild dog), North America (bison, red wolf, pronghorn, bald eagle, seal, penguin, farm animals), and Australasia/The Tropics (emu, kangaroo, anteater, flamingo, sloth, monkey, wallaby). Plus you can visit the Silk Road (camel, moon bear, snow leopard, panda), and Madagascar (lemurs, tortoise). Great care has been taken to create the feeling that you are moving from one natural environment to another. Ample foliage makes it a pleasant excursion on a warm day. There are plenty of rest rooms, benches and snack bars. For us, the highlight by far was the three elephants, and the informative talk given by one of their attendants.

Our final destination (so far) was the Capron Park Zoo in Attleboro. I had never heard of this zoo, until I saw it featured in – of all places — People magazine. Capron Park’s main attraction right now is Ramses, a white lion who likes to play. Other zoo-bound lions tend to snooze the day away, but not this one. He loves preening for the guests. As does his cub, born last fall. This zoo is much smaller than the others, which means it is perfect for a visit with a toddler who refuses to sit in a stroller. Little legs can easily walk from one exhibit to another, and see all there is to see in just a couple of hours. Other featured animals include: snow monkeys, sloth bears, warty pigs, meerkats, a snow leopard, emus, kangaroos, a green tree python, owls and other nocturnal creatures, plus llamas and goats (that you are encouraged to feed). A new exhibit, Lemur Island, in the middle of a large pond, opens this spring. Restrooms, a gift shop and snack bar, and a new playground round out the offerings at Capron Park.

Two other local zoos are on our list of Place To Visit soon. The Stone Zoo, in Stoneham, features a bald eagle, black bears, reindeer, roadrunners, jaguars, and yaks. And the Buttonwood Park Zoo, in New Bedford, is home to bison, black bears, elephants, harbor seals, a bald eagle, river otters, deer, and coyote.

Do an Internet search for any of the zoos mentioned above and you will find visiting hours, directions, maps and almost everything else you need to plan your trip. In many cases, the warmer the weather, the more you will see the large jungle animals outdoors (many of them are kept inside in the colder months). Certainly you will see – and learn about – animals you would not otherwise find here on the South Shore.