Home / Blogs / Looking Down at the Stars 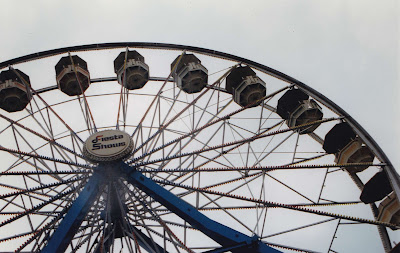 Imagine this. You are outdoors on a late summer night, well past twelve. For the first time all season, the breeze is crisp, offering the first indication of autumn’s steady approach. Bundled in extra layers, you lie on your back and gaze up at the stars.

The darkness of the new moon makes the constellations all the more evident. You see the Big Dipper, the stars of Orion’s belt, the bright glow of Jupiter to the east. Perhaps you wish you knew more — the names of the stars, the stories behind those names, the significance of their presence in the sky tonight.

As your vision adjusts to the darkness, additional constellations seem to appear out of nowhere, pinpricks of light emerging on a blue-black backdrop, growing larger and brighter before your eyes. A shooting star streaks by, so sudden you forget to make a wish. You wonder who else is noticing the stars tonight: how many people, in how many different places on the planet, are gazing up at the sky?

The night draws you in. Transfixed, you feel the earth shift beneath you, raising you in an arcing motion until you are looking down at the stars. If not for the solid boards beneath your back, you would think you were floating in space.

It’s late August, and the Marshfield Fair is happening once again. After the sun sets, the carnival glare bleeds upward from the horizon, creating a haze that obscures the skyward view. I wonder how much darker it would be if the lights from not just the Fair but the entire downtown area were switched off — how much more would we be able to see? I think of camping trips — in New Hampshire, in the Southwest — where the sky seemed so much bigger, the stars seemed so much brighter . . .

This year the Fair offers the usual array of attractions — the rides, the games, the exhibits and vendors. Walking along the midway the other night, among the flashing lights, the bustling crowds, the half dreamy, half rushed rhythms of another summer drawing to a close, I found myself enchanted by the spectacle of it all.

It used to be the games that attracted me to the Fair. I wanted nothing more than to return home with a stuffed animal so large that I’d have trouble fitting it in the car. Later it was the food that appealed to me: who could resist the aromas of sizzling onions and peppers, of fried dough, of cotton candy? And finally, it was the rides. Nothing could beat the exhilaration I felt while being lifted from the ground, turned upside down, jostled, jolted, and whirled in circles; half screaming, half laughing, my stomach lurching, my breath catching in my throat.

It’s different these days. I’ve outgrown the games . . . or at least the prizes they offer. The food still seems like a great idea, but wisdom gained from years of experience generally leads me away from the frying oil and sugar spinners. As for the rides, I’d be hard pressed to go on all but a few.

It’s not a safety issue for me. Unlike a lot of people I know, I’m not all that concerned about the working condition of the rides. I figure that the carnival company and the Fair itself have been in business long enough to provide a reasonably safe experience, a reasonable amount of the time. At this time of year, riding The Skymaster is probably less dangerous than navigating Route 3A at dusk, when every other driver is looking for the best parking space at the best price in the least amount of time possible, without any regard for pedestrians or other vehicles. No, the reason I won’t go on the rides anymore is that I am just-plain-afraid.

I used to love roller coasters. I want to believe that I still do. But last year, while at an amusement park near Cincinnati, Ohio, I realized that they now scare the heck out of me. Just walking through the park gates I felt uneasy. It had been a while since I’d been on a roller coaster, so I thought that if I started slowly, I could ease myself into more daring experiences. Instead, after exiting the first ride, I found myself shell-shocked. The plan was to fill the day with as much exhilaration as possible, but I couldn’t bring myself to board another ride.

I hadn’t expected to be so afraid. I had no rational explanation for my change of heart, and thus I felt like a coward. But when I started telling my story to friends who I knew had also once loved roller coasters, it became evident that I was not the only one who had developed this fear.

One friend explained it as such. As teenagers, we had our share of nightmares, what-ifs, and other common fears. But these existed, for many of us — myself included — within the relatively safe framework of family, school, and friendships, where our lives were plotted out, at least through twelfth grade, in a relatively predictable pattern. Big fears seemed less immediate, less tangible. With family, teachers, and friends playing fairly consistent roles, it was easy to assume that we were safe, that even if all was not right in the world, we were protected somehow. With that illusion of protection — the imagined guardian angel on the shoulder — we could indulge ourselves in frightening, sometimes terrifying situations, and feel nothing but exhilarated by them.

But as adults, after secondary school or college or grad school is over, when we’re supporting ourselves, maybe even supporting a family, and fully responsible for our own well being, the situation is different. We’ve got enough to worry about: the economy, keeping our jobs, paying our bills, succeeding at whatever it is we wish to do. We don’t want to bring more fear into our lives. We’re trying so hard to keep ourselves together that we don’t dare even entertain the possibility of feeling our world lurch to the left, slide to the right, flip upside down, or have the bottom drop out if it. Life itself provides enough excitement.

Say someone new comes into your life. Say that you did not expect to meet anyone . . . not so soon . . . nor did you expect to have such strong feelings for the person. Not much changes — your work, your family life, your sense of self are only enhanced by this new relationship and the way it makes you feel. But your perspective shifts. Suddenly you’re thinking about the future in very real terms — thinking about things you never really had to think about before. So, in a way, everything changes.

The control freak in you doesn’t know how to handle this. You have always been the one operating the roller coaster, the one who makes sure the safety bars are locked down before the switch is pulled and the ride begins. But now life has snuck up on you, tapped you on the shoulder and said “You’re coming with me.” You like where you’re going, but a part of you wants to run back home for a minute — to make a few phone calls, and collect a few things so that you’re better prepared for what lies ahead. We can’t always be so prepared.

Especially today, with warring factions, terrorist attacks, and natural disasters plaguing the planet, we can never be sure what tomorrow will bring. We are each responsible for the paths we choose in life, but by the same token, we can’t fully control what happens to us. We can check, double-check, maybe triple-check the safety bars. We can close our eyes, hold our breath, and pray that we won’t fall. Or we can simply trust that we have prepared ourselves well for what lies before us. The earth is moving beneath us. What might we see as we rise up into the sky and look down into the stars?