Home / Blogs / More Impediments to Fish Passage to be Removed on Third Herring Brook this Fall!

This fall, in partnership with Hanover Crossing, Mass Division of Ecological Restoration, NOAA Habitat Conservation, and MassBays, we will be removing two weirs on the Third Herring Brook to restore fish passage and remove unnecessary infrastructure. The weirs are located approximately 1 mile downstream of the Jacobs Pond dam at Rt 123 and ¼ of a mile upstream of the former Peterson Pond dam that was removed in November of 2020.

The origin of these two weirs is quite interesting! They were put in place when the Hanover Mall was built in 1970. Their purpose was originally to make this part of the brook into pools with fountains as part of the landscaping plan. Fifty plus years ago, in addition to the weirs being placed in the brook, the actual Third Herring Brook was filled in and moved from its original location and doglegged around the Hanover Mall Sears parking lot to make way for the mall. This kind of filling in of wetlands would most likely not be allowed today because of our state’s strong Wetlands Protection Act, which was passed in 1972 just after the Hanover Mall was developed. 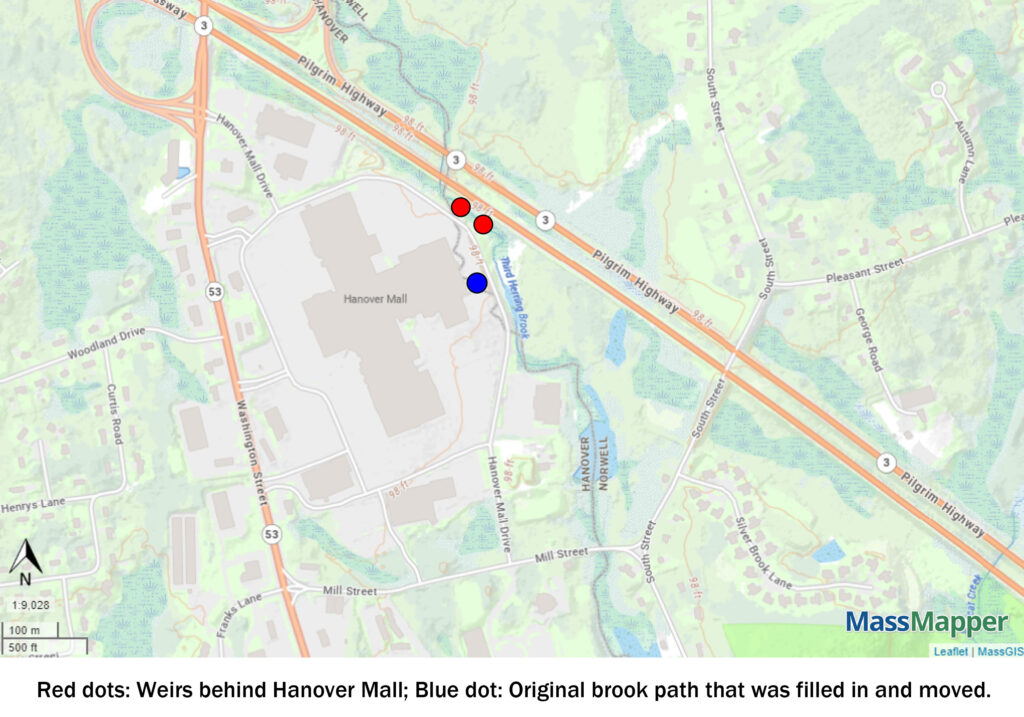 All of the dams and most of the other infrastructure that impacts our rivers and watersheds, like road crossing culverts and stormwater pipes, were built before we understood the value of rivers and wetlands and the need to protect them. Thankfully, as we have become more aware and educated about the functional role that rivers and wetlands play in protecting our drinking water supplies, preventing flooding, supporting on the water recreation, and sustaining biodiversity and wildlife, we have done a better job at protecting and restoring the our waters… like our current project to restore the Third Herring Brook for river herring and other fish like Eastern native brook trout.