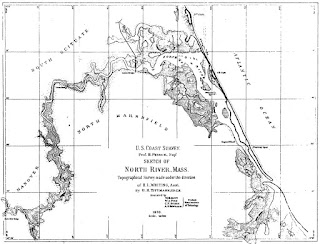 I found the following article on microfilm at the Ventress Memorial Library in Marshfield. Back in the 1970s, Walter E. Crossley of Pembroke wrote a column entitled “As I Remember,” which was a series of remembrances, mostly about the North River. This one appeared in the Marshfield Mariner on June 15, 1972.

What strikes me most about the subject of this article, a man named Nat Magoon, is that he was able, more or less, to live off the land, even through the winter, right here on the South Shore. I doubt that there is anyone who would be willing to do such a thing nowadays.

Such reminders of times gone by make me thankful for modern conveniences – but also curious about how to make do with less.

OLD MEN ON THE NORTH RIVER
My choice of the old river man falls on Nathaniel Magoon, better known as Nat.

If someone had addressed him as Mr. Magoon, he would have looked about in surprise to see who was being spoken to. He lived in a small house, inherited from his parents, for practically his entire lifetime. This was located squarely in the middle of the present 139 route at the Water St. intersection.

A LEISURELY GENT
Nat (I still think of him by that name) was a leisurely moving, rather stout man. I have heard my mother say that when Nat went to the one room school with her, he spent most of his time asleep. If called on by the teacher, however, the proper answer was immediately given. I imagine his formal schooling ended early. For Nat’s way of life, anything beyond the three R’s was wasted.

He was pretty much self sufficient. He acquired the few dollars of cash he needed by trapping in the cold winter and, on occasion, he did odd jobs. If he had an unlucky winter, he worked for a few weeks on the town highways in the spring.

Nat could make a split oak basket strong enough to stand on or he could shape an ax handle, if need be. When he needed a boat, he built one. His dory may have been a bit rough by present standards, but it served him for forty years.

Can we say as much for one of our modern fibre glass or plastic boats?

The trapping and hunting season started with the first. The came the muskrat up until spring. The furs brought cash, the bodies food. An occasional duck, partridge or rabbit furnished variety. Potatoes and other winter vegetables came from his own garden and were stored in the cellar.

Eels were speared all winter. And with the coming of spring, Nat looked forward to the herring run. Fresh and salted, they were on the menu for a long time.

HIS SPECIALTY
He had one specialty. A scoop or two of flour, a few other ingredients were stirred together and baked in the oven and, in a short time, produced biscuits that made the local housewives green with envy.

By the time the herring run had ended, summer had arrived and there were garden vegetables, fish, clams and a turtle now and then. They did nicely until fall when the round started over.

On a nice day with a fair tide, Nat could be found down on the river, sometimes with Mr. Simeon Phipps, but more often alone. His trips on the river were leisurely voyages. He started from what is now the Pembroke Marine and Route 139 and rowed just enough to keep off the bank. A couple of buckets of clams and a goodly catch of flounder were his reward. There was peace and quiet on these trips and plenty of time to observe nature. There was never any hurry.

This was Nat’s way of life. It was as he wanted and it sufficed him for many years.

He was held up to us boys as a bad example – no job, a lazy good-for-nothing. He envied no one and was free from the hurry and strain of our present competitive existence. I sometimes wonder if he had something that is largely lost today.

There were many others of that era. Some I knew personally, some by hearsay. They, no doubt, varied as to appearance and habits but the basic pattern was the same.

There were the Hendersons and Pratts from Norwell, the Flahertys of Third Cliff, Phillips and Rogers of Marshfield, William Cann, Melvin Ewell, several Damons and many others. I do not attempt to remember them all. The hurry and stress of our modern era has about, if not quite, done away with their mode of living. I doubt it will ever return.
By Kezia Bacon-Bernstein, correspondent
November 2008

Kezia Bacon-Bernstein’s articles appear courtesy of the North and South Rivers Watershed Association, a local non-profit organization devoted to the preservation, restoration, maintenance and conservation of the North and South Rivers and their watershed. For membership information and a copy of their latest newsletter, contact NSRWA at (781) 659-8168 or visit www.nsrwa.org. Visit http://keziabaconbernstein.blogspot.com for an archive of the last 12 years of Kezia’s articles.