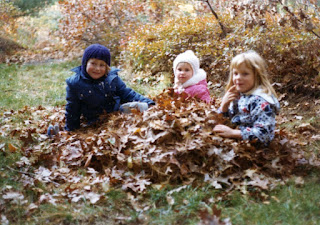 In the neighborhood in Marshfield where I grew up in the 1970s and 80s, the kids were allowed to roam the streets until dark — and sometimes after. Mostly we played in each other’s yards, rode our bikes, or played kickball, baseball or other games in the big triangle where three streets came together. We were almost always outdoors – skating or sledding in the winter, swimming in the summer when a parents was around to supervise.

One of our favorite places to play was a vacant lot that we dubbed Kids’ Highway. It was only a half-acre, but it seemed much larger. It was thickly wooded, and older kids from the neighborhood had created a network of bike trails among the trees.

When I first learned to ride a bicycle and was allowed to pedal “around the block” with a friend, I was cautious about entering Kids’ Highway. It seemed mysterious — a place more for older kids than an elementary-schooler like me. Its dense stand of pine and cedar trees didn’t let in much light, so it was always dark inside. Toward the back, in a spot where parents were least likely to see what was going on, there was a clearing where – the story was told – some of the boys had fist fights, or smoked cigarettes. Sometimes empty beer bottles could be found there too. (Back then, it was fun for us to collect all the different, colorful bottle caps, hoping for an unusual one.)

Once I overcame my fear of biking along the root-knotted trails through Kids’ Highway, I liked to race my friends to see who could pedal through the fastest, without “wiping out.” These were the days before mountain bikes, so there were plenty of falls.

At the far end of Kids’ Highway was a large pile of dirt – probably 15 feet high – that also had a path worn into it. The more adventurous boys would try to jump their bikes off of it, creating a ramp of compressed dirt at the bottom. I would sometimes run down it, but it took me years to work up the guts to hurtle my bike down that hill and “catch some air.”

One of the best features of Kids’ Highway was a tall tree – probably an oak — with lots of strong branches – perfect for climbing. The tree was in the corner of the property, so once you got up into it, you could see far down three different streets. I wasn’t inclined to climb the tree (not higher than the first realm, anyway), but one of my friends was. One day we packed a picnic lunch and took our one-speeds (mine had a banana seat!) on a “bike hike.” We ate our sandwiches under the tree, and then my friend decided to climb. She got high enough to get scared — and would not come down. I had to go all the way back to her house to find her father, whom I hurriedly led back to the tree, to help her.

Kids’ Highway was a magical place. You rarely saw an adult there. As the name implied, it belonged to the kids. So you can imagine our outrage when one day some workers came to cut down most of the trees. Before long, trucks dug a big hole, and more workers poured a foundation. In a matter of weeks, Kids’ Highway was gone – someone’s house was there instead.

People say that children don’t play outside anymore. I don’t think that’s true – I know plenty of kids who play outdoors – and enjoy it immensely. Perhaps what has changed is the roaming. The tree climber and I (still friends, yes, 30 years later), debate whether it’s safe for her eighth grader to ride his bike half a mile to the town center, when we ourselves did it in fifth grade, from farther away. We’ll think twice (or more) about letting the younger children stay outdoors – and more importantly out of earshot — until dark.

Our generation of parents may be more cautious about letting our children roam free. Our towns – and streets — are much more populated now, and in general, the times demand closer supervision. But it’s important that we not let go of the notion of playing outdoors, especially in areas that are not fenced it. There is so much to learn from pretending to be explorers in the woods, making discoveries absent from the purview of a parent. So much to learn in burying “secret treasures” in the forest peat and then trying to find them a week later. So much to learn from creating one’s own games – where the tools are forked sticks instead of joysticks – making one’s own entertainment rather than demanding to be entertained.

When my son and his friends are old enough, I want to be able to say, “Go out and play,” and not worry that I’m asking them to do something that’s just not done anymore. We have a nice, big wooded lot in our backyard – I hope my son will create his own Kids’ Highway there someday.