The Scituate Shellfish Advisory Committee hosted a meeting on June 17, 2021, and invited representatives of the Massachusetts Division of Marine Fisheries to present to the public why last year’s sudden closure of the recreational shellfish beds in the North and South Rivers. Many local recreational shellfishermen attended along with State Senator Patrick O’Connor, Representative Patrick Kearney, and members of the Scituate and Marshfield Selectboard and board and staff of the NSRWA. 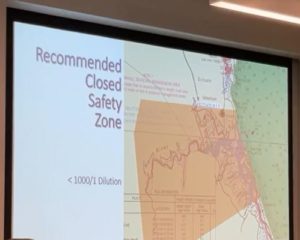 1:1000 dilution rate to around a sewer treatment plant outfall. The Federal Food and Drug Administration (FDA) set this new standard for the interstate sale of shellfish. This new standard is to prevent the contamination of shellfish from noroviruses and to protect public health. However, the Massachusetts Division of Marine Fisheries has decided to impose this same standard on recreational shellfish harvesting areas.

The Scituate Wastewater Treatment plant discharges to the Herring River, which ultimately flows into the North River and Massachusetts Bay. According to the FDA’s initial calculation, the North and South Rivers shellfish areas do not meet the 1:1000 dilution standard. Neither do areas in Cohasset Harbor and Plymouth Bay and many other areas in the state where wastewater discharges are proximate to shellfishing areas.

At the meeting, the audience, including our board and staff, pressed MassDMF for answers on how we can re-open the beds and why we are being held to the same high standard as commercial shellfishing. We were essentially told that we were guilty until proven innocent. The Scituate Wastewater Treatment plants influent and effluent will be tested to prove that the shellfish are free of viruses. A hydrodynamic flushing study and/or dye study must determine how diluted the effluent might be in the rivers.

Unsatisfied with some of the answers we received at the meeting, the NSRWA partnered with EarthRise Law Center to issue a public records request to the Massachusetts Division of Marine Fisheries to shed more light on decision-making. We will continue to pursue all avenues, political, legal, and scientific, to ensure that the public’s natural resources and the right to use them are not taken away from them arbitrarily, while at the same time ensuring the safety of the shellfish for eating.  Please stay tuned to understand the issues better and get the shellfish beds re-opened for the upcoming shellfish season.

Previous reporting on this topic can be found here.