Into the 21st Century

The following is the 7th installment of a twelve-part series on the history of the organization.

As the NSRWA moves through the early decades of the 21st century and celebrates its 50th anniversary in 2020, it is a different organization than the one founded in 1970. From a small group of citizens concerned about the future of the North and South Rivers as it confronted the dangers caused by pollution because of the increasing development, both public and private, it has grown into an influential and effective regional environmental organization with more than 1,900 members, hundreds of volunteers, and a growing full-time staff of talented professionals. At the same time, it has remained true to its original purpose stated at its inception in 1970: to make “a concerted effort to preserve, restore, and maintain and conserve the natural state of the waters and related resources of the North and South rivers.”

One confirmation of this are the stated goals of the Watershed’s 2005-2010 strategic plan: Protect, Restore, and Educate.

As I began to think about how I was going to write about the Watershed’s history in the first two decades of the 21st century, I was struck by the sheer volume of the number of projects, programs, and activities the organization has developed and been involved in over these 20 years. I soon realized that to attempt to describe all activities and campaigns the Watershed was involved in over these two decades would require something akin to a series of bullet point descriptions. In searching for a better (and more engaging) organizing scheme I decided that there was no better one than to organize the history of these two decades around the goals of the Watershed: Protect, Restore, and Educate. 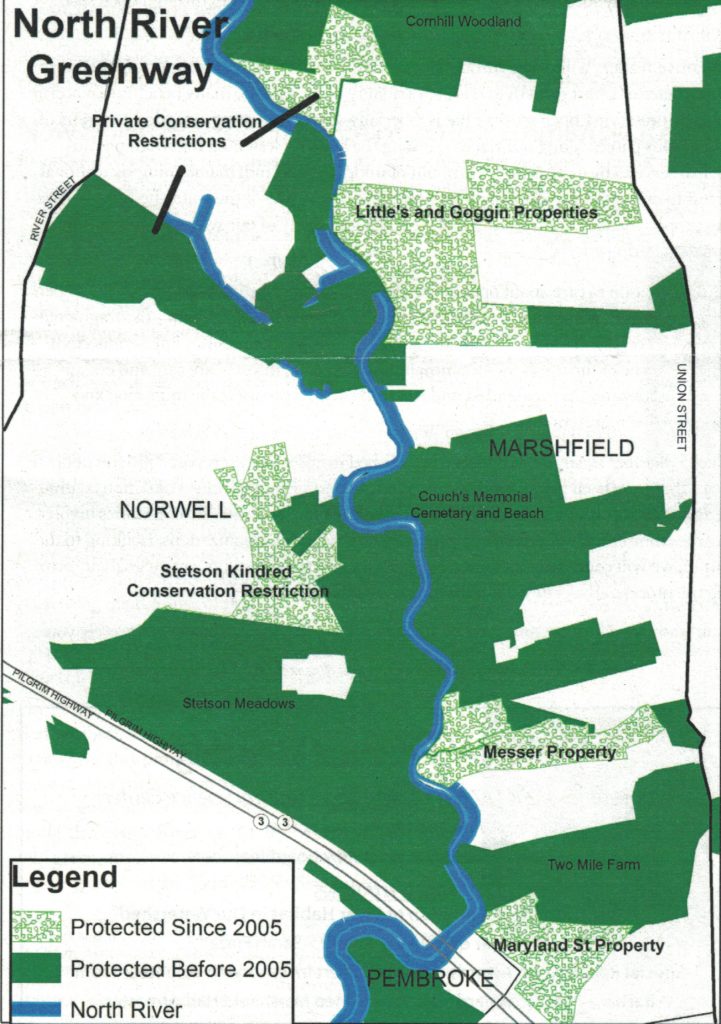 In its 2004 survey of NSRWA members, respondents identified protecting river resources, including land, as one of the Watershed’s greatest strengths. However, they also identified effective management of land use and increasing the capacity of communities to actively engage in watershed protection as some of its biggest challenges. To meet these goals the NSRWA would focus on protecting lands that have been identified as essential to watershed sustainability and support “green” planning and development in the region to protect water resources. In order to achieve these goals the NSRWA would continue to partner with other environmental organization such as the Wildlands Trust, the Trustees of Reservations, Maxwell Conservation Trust, and local Community Preservation Committees to save lands that were critical to the watershed’s health.

Building on its earlier North River Mapping Project, in 2004 the NSRWA, in collaboration with its land trust partners, the Wildlands Trust, MassAudubon, and the Trustees of Reservations, published a report and launched a campaign entitled “Protecting What Matters.” The main focus of the campaign was to identify where to concentrate efforts for future land protection along the North River. The area of the river which received the most attention would be the stretch of the river approximately 2 miles from Route 3 downstream to the Cornhill Woodland owned by the Town of Marshfield. By 2011, 176 acres of land abutting the North River and other already protected land had been saved, creating a North River Greenway (see accompanying map and chart).  In 2013, an additional 11-acre parcel on the North River at the end of Masthill Lane was acquired by the Town of Norwell adding to the North River Greenway. 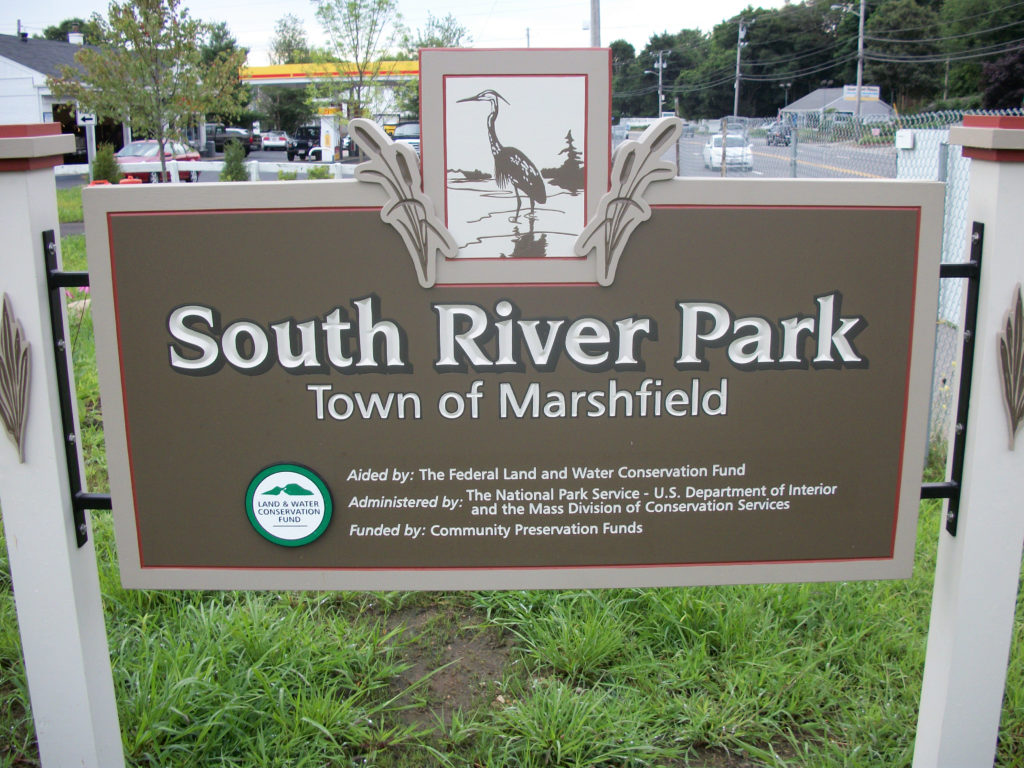 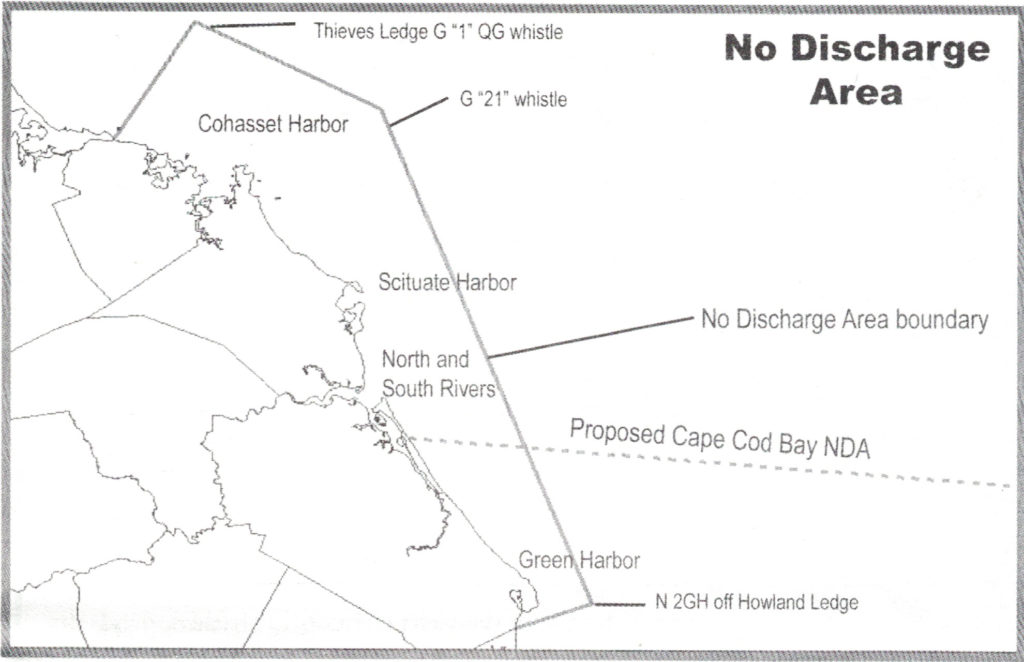 When the NSRWA settled the discharge permit with Scituate Wastewater Treatment plant in the 1990s, the Town of Scituate was required to pursue a No Discharge Area (NDA) designation for the North and South Rivers. An NDA is “an area of coastal or inland waters where all discharges of boat septage are prohibited regardless of treatment.” In order to achieve an NDA designation, Scituate needed the cooperation of Marshfield since both towns had jurisdiction on the rivers, but when approached in 1996 Marshfield was not interested. In 2004, the NSRWA decided to get actively engaged in an attempt to move the issue forward. One obstacle was proving to the EPA that there were adequate pumpout facilities for boaters. In 2004, the NSRWA succeded in getting the Harbor Mooring Service to provide pumpout boat service to the North and South Rivers. In 2006, the NSRWA held a joint meeting with the Scituate and Marshfield Waterways Committees, getting them to agree to pursue the NDA. In 2008, culminating 12 years of work by the NSRWA, Mass Bays, and the towns of Scituate, Marshfield, and Cohasset, the EPA designated the areas of Green Harbor, the North and South Rivers, Scituate Harbor, and Cohasset Harbor as an NDA. This put in place more stringent rules to prevent pollution of the rivers and coastal waters of Scituate, Marshfield, and Cohasset.

In another effort to protect upstream portions of the North River, the NSRWA would revisit an issue which had been one of the catalysts for the formation of the Watershed Association. In 1963, “Cap’n Bill” Vinal and Dr. Arthur Garceau spoke out against the construction of sewage treatment plants by Rockland and Scituate which would discharge wastewater into the North River. Forty-three years later, in the spring of 2006, the NSRWA filed an appeal to the Environmental Appeals Board in Washington, D.C. regarding a National Pollution Discharge Elimination Permit (NEDES) under the Clean Water Act which authorized the Town of Rockland to discharge wastewater into French Stream. French Stream drains into the Drinkwater River which is a tributary of the Indian Head River which drains into the North River.

The NSRWA’s appeal, which resembled the earlier battle with Scituate over its treatment plant, was filed because the Town’s wastewater system had deteriorated to the point that when it rained heavily the plant became overwhelmed with wastewater. This resulted in the discharge of partially treated sewage into French’s Stream in Rockland. This meant that Rockland’s Sewage Treatment Plant was not in compliance with the discharge permit issued by the EPA. The Watershed’s appeal requested that the EPA require Rockland to comply with flow limits of 2.4 million gallons per day, which were exceeded after rain events, to reduce the concentration of some pollutants, such as phosphorus, and to increase the monitoring of French’s Stream. As a result of the NSRWA appeal and negotiations with the EPA and the Town of Rockland, the EPA issued an Enforcement Order to Rockland which included a compliance schedule for addressing the infiltration and inflow issues. In addition, the new permit was revised to provide a timeframe for meeting reductions in phosphorus concentrations discharged into French’s Stream and the reporting of flow discharge on a monthly average rather than a yearly average, to prevent masking reporting of high flow months.

Another effort to protect the rivers has been the NSRWA’s continued advocacy for cleanup of the contaminated Fireworks Site in Hanover. Beginning in 1907, the National Fireworks Co. manufactured and tested fireworks and munitions at its West Hanover factory. The factory sat upon approximately 240 acres bounded by the Drinkwater River wetland and Factory Pond, both of which flow into the Indian River, which then flows into the North River. Although munitions manufacturing ceased in 1972, an EPA evaluation of the site in the 1980s acknowledged that the site was contaminated with mercury, lead, and volatile organics. Since 1995, the Massachusetts Department of Health has warned the public not to consume fish caught in Factory Pond and the Drinkwater and Indian Head Rivers. In 2014, a federal court reached a record $5.15 billion settlement for an environmental contamination case, which allotted $73 million for the cleanup of the National Fireworks Site. Additional funding for the cleanup, which could cost as much as $121 million, would be sought by the Town of Hanover and the MassDEP from other responsible parties, including MIT and the Department of Defense. In September 2019, public input was sought at a hearing in Hanover on three cleanup proposals for the site. NSRWA’s major concern is the potential failure of the aging Factory Pond dam which would allow contaminated sediment to move downstream into the Indian Head and North River system. A thorough cleanup of the Factory Pond site would allow for the removal of the dam and reconnect this river habitat.

Look for Part 8 of the NSRWA history series next month where we will focus on NSRWA’s work in Restoring Streamflows and Habitats!