Ever wish you could be that person casting a fly fishing rod on the scenic banks of a river – sounds zen right? This class is designed to introduce people to the sport of fly fishing. Join our Trout Unlimited friends, Warren Winders and Joe Danubio, to learn the basics about fly fishing and casting. […]

NATURE by Kezia Bacon, Correspondent Lately I’ve become fascinated with a certain stretch of the Indian Head River. From the bridge on Cross and State Streets, at the Hanover-Hanson town line, to Luddam’s Ford Park in Hanover and Pembroke, the river flows for two miles through a peaceful, secluded valley. On the Hanover side, a […]

Spring means flowers, songbirds, and the annual upstream migration of river herring to spawn in the streams and ponds they were born in! These historically large migrations of fish into our freshwater streams, rivers, and ponds once supported the Native Americans, the Pilgrims, and the colonists who came after them. They would use the fish […]

NATURE by Kezia Bacon, Correspondent This winter has been mild so far, but let’s not forget the storms of last March. Spring doesn’t arrive until the 20th, and even then, we won’t necessarily be spared from snow, wind, and bitter cold. It’s not unusual to want to hibernate during the colder months, but stepping outdoors into a natural setting, even for a small […]

By Brian Taylor, NSRWA Environmental Educator The NSRWA has launched the WaterSmart Water All Around You school program for 2019! Since the program started visiting schools in 2008, we have educated more than 25,000 South Shore students. Water is a valuable resource, especially here on the South Shore, so it’s important to use it wisely. […]

To date there have been 5 single-use plastic bag bans enacted on the South Shore, with another ban coming up for vote in Scituate on November 14. NSRWA honored those people who spearheaded the ban in their town at the annual meeting. Residents from Pembroke, Cohasset, Plymouth, Duxbury, Marshfield, and Scituate, were in attendance and […]

Inspired by the Marshfield plastic bag ban, citizens in Pembroke brought their own propsal to town meeting and it passed by a narrow margin Tuesday night, October 23. Scituate residents have also taken up the cause. Please attend Scituate’s Fall Special Town Meeting on November 14, and support the ban to help protect our local waters! And don’t forget […]

What comes up must go down or what goes in must go out is an idiom that holds true for physics, biology and for migrating fish! Remember last spring when we were begging people to help us count river herring as they migrate inland to spawn from the ocean? Well guess what the baby fish […]

The North and South Rivers Watershed Association, in conjunction with WaterSmart South Shore, held a painted rain barrel raffle. The NSRWA is collaborating with ten artists and groups on the South Shore for this public art project. A big thank you goes out to our participating artists and groups: Duxbury – Todd Alvey, Atlantic Illustration […] 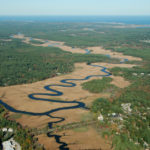 NSRWA Executive Director Samantha Woods met with an abutter to the proposed 40b Development on Water St. in Pembroke on Monday afternoon regarding the 56 unit housing project being proposed on the North River. A group of concerned citizens has come together to form the group Cap’n River or Citizen’s Against Polluting the North River. They […]