People Protect What They Love and Know

Since its founding in 1970, educating and engaging the public to restore and protect our local waters has been a primary goal because people will only protect what they love and they only love what they know. Over the past five decades, the NSRWA developed and expanded student education, broadened citizen science monitoring, and increased its outdoor recreation offerings to achieve this goal. 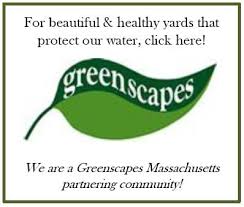 One of their first education programs began in 2003 when the NSRWA began an outreach program to promote ecologically sound landscaping practices called Greenscapes and focused on reducing impacts to water resources. The program was a collaboration between the NSRWA, MassBays, and 12 South Shore towns. Part of the effort involved mailing a 20-page booklet to 70,000 homeowners in participating towns, which included practical tips and how-tos for Greenscaping. Today that information is available online. Greenscapes also offered free workshops, private consultation at a home or business to learn how to implement Greenscapes practices, and sold rain barrels and hose sprinkler timers. In 2008, Greenscapes would introduce Water All Around You, an environmental education curriculum that local schools could adopt at no cost that would expand the NSRWA’s education reach regionally. 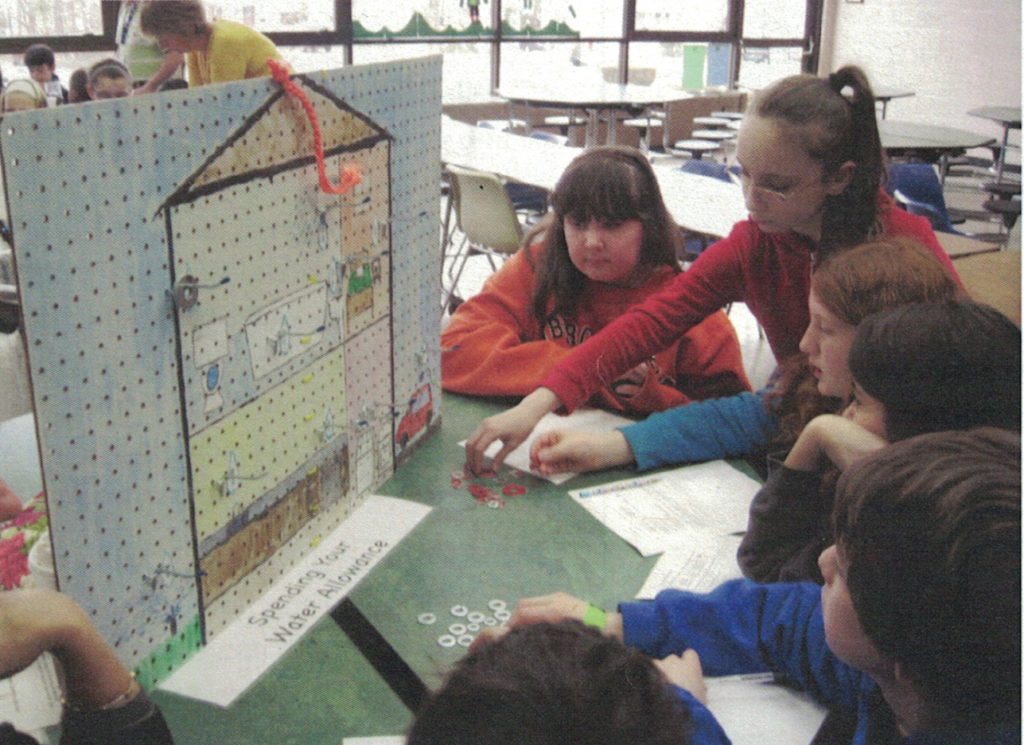 In 2008, with financial support from the Scituate Rotary, the NSRWA piloted the Water All Around You program with 5th-grade students in Scituate’s public schools. NSRWA staff visited each of Scituate’s four elementary schools for one week to teach students about such topics as the water cycle, where water comes from in their town, and the geography of their watershed. A watershed field trip to visit the wastewater treatment plant, the reservoir, and to Humarock to see the South River was part of the program.

Thanks to a grant from the Massachusetts Department of Environment Protection and support from watershed communities, specifically the Department of Public Works and Water Departments of the watershed towns, NSRWA expanded the program to encompass more communities. Today, over 27,000 students have gone through the Water All Around You curriculum, moving the NSRWA closer to its goal of providing water education to each child in the watershed at least once in their school career. The program engages 350 parent volunteers each year to become educated along with their kids. In 2017, the NSRWA rebranded and expanded the Greenscapes program to become the WaterSmart South Shore program. 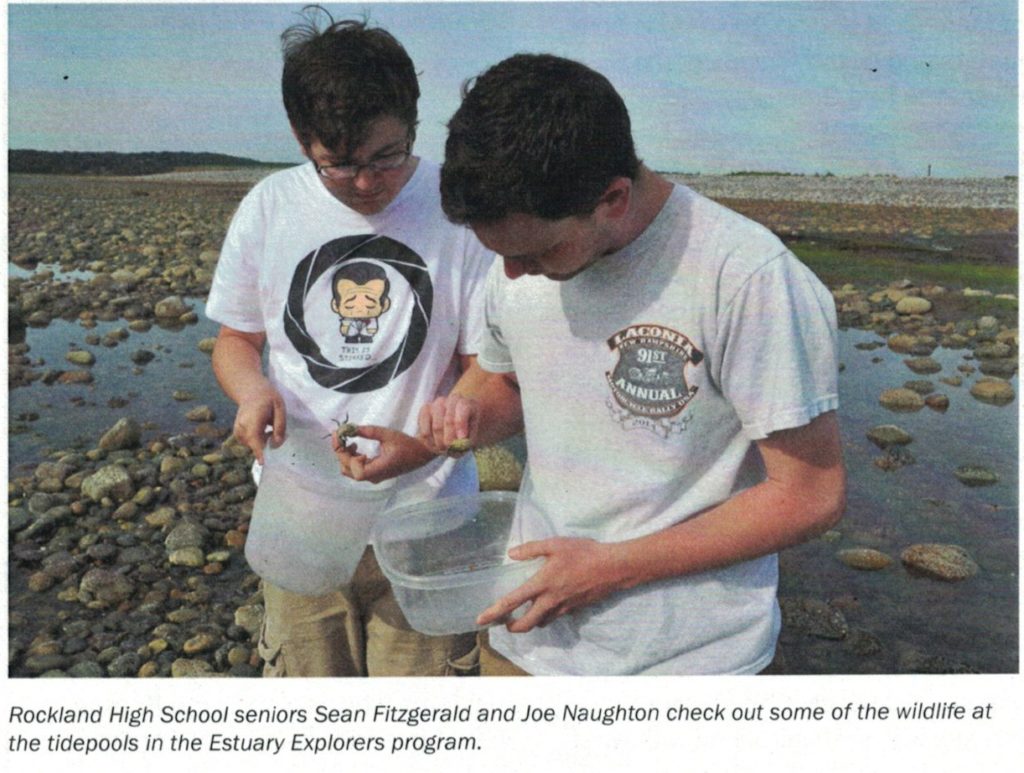 Engaging youth in the outdoors is another program area that has been developed by the NSRWA over the years.  In 2001 the NSRWA began an outdoor summer River Adventurers Camp for middle school aged children that teaches campers how to kayak, practice water safety, and explore the natural and cultural history of the North and South Rivers. In 2016, the NSRWA launched its Estuary Explorers program, which brings local teens and pre-teens to the North River estuary on the NSRWA’s pontoon boat to experience what it would be like to be an environmental scientist. The program can also be a complement to a school’s STEM curriculum and fits in easily with any AP Environmental Science course.

In 2018, the NSRWA made another huge commitment to its education program when it hired its first full-time environmental educator, Brian Taylor.  Brian, who is a lifeguard, wilderness first responder, and experienced river guide, has continued and expanded the successful Estuary Explorers and Water All Around You programs. He has also added programs that focus on getting kids out on the rivers — offering more kayaking trips and partnering with the South Shore YMCA, the Boys and Girls Club of Marshfield, and the recreation departments of Rockland and Norwell.

In the spring of 2020, with the help of the Division of Marine Fisheries and financial support of Battelle, the NSRWA developed a FISH School program, providing middle and high school students the opportunity, through the use of an underwater camera, to go online and count river herring as they migrate to the South River. In response to the Coronavirus pandemic, the NSRWA expanded its outdoor programs to meet the demand for Covid-safe outdoor programs. One very successful program, South Shore Explorers, provided kids, ages 10 to 14, the opportunity to hike, fish, and kayak at several locations in and around the South Shore. 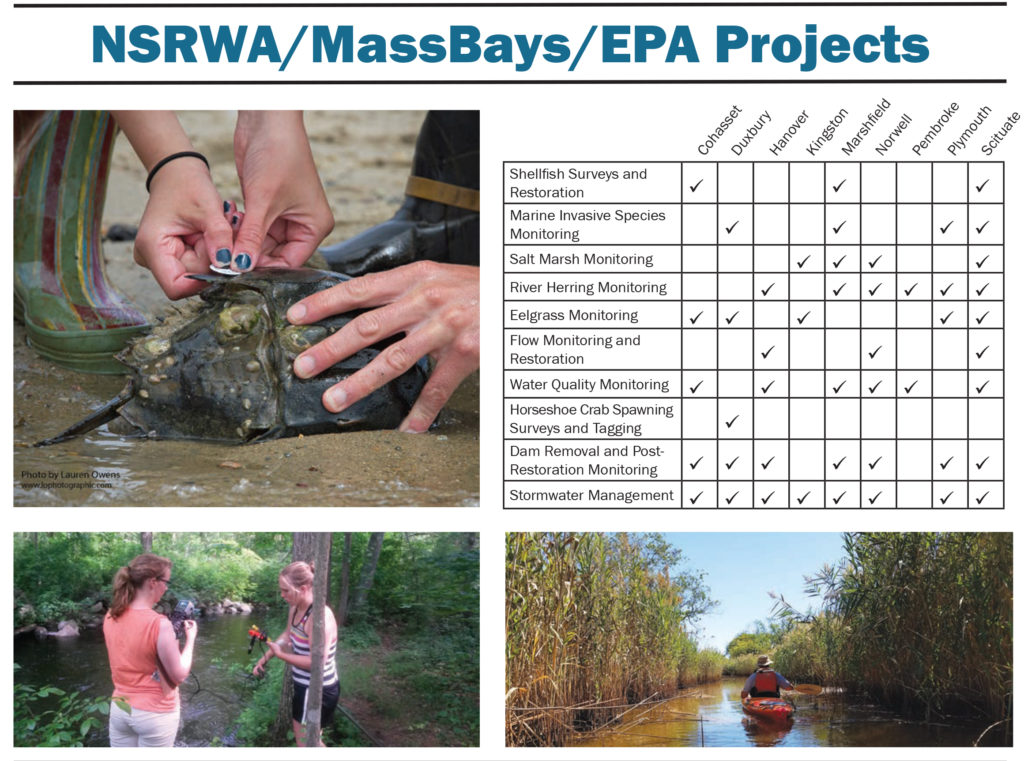 Another way to educate and engage people in efforts to support healthy rivers and water is through citizen science monitoring programs. As the chart on NSRWA/MassBays/EPA Projects demonstrates, there are numerous opportunities for citizens to volunteer to participate in monitoring programs. The RiverWatch Water Quality Monitoring program started 26 years ago and every year since then volunteers have collected water samples at 10 sites; recording water temperature, dissolved oxygen, conductivity, salinity and two types of bacteria. One of the most popular citizen science programs has been spring herring counting. As has been discussed earlier, the NSRWA has made a major effort since the 1990s to clean up and fix fish ladders and determine the number of herring in the watershed’s fish runs. In 2012, the NSRWA established a formal herring count program that would allow the state fisheries biologists to estimate, with some statistical confidence, the annual population size in each run. Since this program began several hundred new volunteers, including me, count herring at assigned runs in April and May spending 10 minutes a few days a week recording water and air temperatures, general weather conditions, and the number of herring observed in the runs. This has provided the opportunity for hundreds of watershed citizens to become engaged with the rivers and their tributaries, acquiring a better understanding of the value of stream flows and other conditions necessary for herring to thrive.

The NSRWA “science department” is headed by Sara Grady, Ph.D. who is the NSRWA’s watershed ecologist and the South Shore Regional Coordinator for the MassBays Partnership. In both these roles, Sara is the person who brings science to decision making in South Shore communities. Aside from coordinating the NSRWA citizen science monitoring programs, she also works on dam removal projects and explaining stormwater permitting to South Shore towns. In March 2019, Sara was sworn in for the State Special Commission on Ocean Acidification. 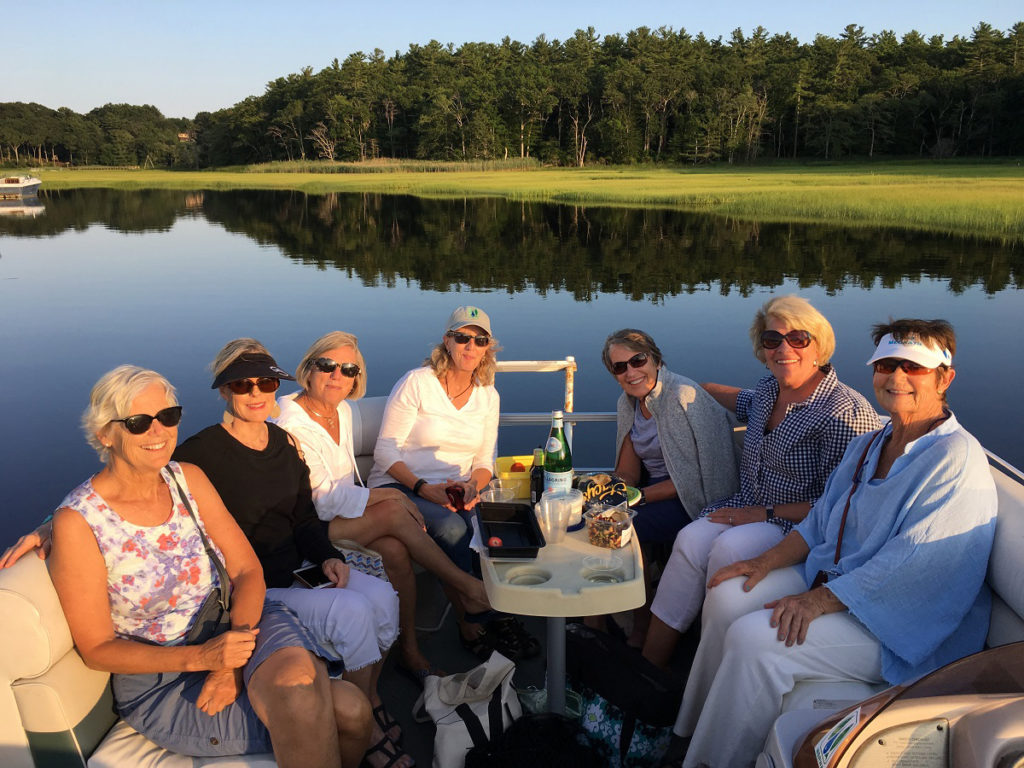 People protect what they love and know and it is not surprising that the NSRWA has increased the number of recreational opportunities it offers to engage people the watershed and their rivers. One of the easiest, and increasingly popular, programs to get people on the rivers has been pontoon boat tours. Although the NSRWA offered occasional pontoon boat tours since the 1990s, in the spring of 2015 it began offering two-hour historical or ecological tours of the rivers in the spring, summer, and fall on a pontoon boat donated by NSRWA supporter Paul Vercollone and mooring and storage space donated by Roht Marine. Each tour includes a guide and captain, coordinated by lead pontoon boat captain Bill Boulter. As one tour participant commented, “having the chance to get up close and personal with the river was a new experience, giving us a greater appreciation of these wonderful and scenic waterways.”

In 1990, the NSRWA initiated what has become one of its most popular events; the Great River Race. The race is a way to involve families in a day of fun activities that help build a love and appreciation for the rivers. When kids and families get introduced to the beauty, the wildlife, and clean water of the North and South Rivers, hopefully, they will want to come back and experience the rivers again and learn more about them. The race generates a lot of very positive publicity in local media and races funds for the organization, such as the $3,000 raised when Sara Grady swam the 7-mile race course in 2014 or this year when paddlers became fundracers themselves. Another long-term event that also gets families involved builds a sense of love and stewardship for the watershed and its rivers, and generates a lot of publicity is the annual Clean-Up Day which was initiated in 1988 by Dan Jones, the NSRWA’s first executive director.

There are so many other recreational opportunities provided by the NSRWA, including Yoga at the Rivers Edge, the New Years Day Walk, the Kayak Expo, the Gardening Green Expo, guided paddles and walks, that it would be impractical to describe each one. However, there are a couple of recreational opportunities that have been initiated recently which are worthy of attention. In 2017, the NSRWA held its first annual South Shore Striper Tournament. In 2019, 133 anglers competed in six categories for $4,000 is cash prizes. The biggest striper, 45.5 inches, was caught by John Paul Adams.  Aside from raising funds for the NSRWA, the tournament highlights how restoration projects, such as dam removals and fish ladder improvements, on the South Shore have increased fish habitat. In another effort to inform watershed citizens of the many recreational sites on the South Shore, in the spring of 2019 the NSRWA launched its Explore South Shore website, which identified 105 points of interest along the North and South Rivers and their tributaries. The website contains photos, trail maps, tide and parking information, and details of each property’s history, wildlife, and features of interest. This year the website expanded to include more hiking, boating, fishing, and paddling locations on the South Shore. The NSRWA also published its updated Guide Map, which is available to members for free, and can be paired with the information on the Explore South Shore website.

There was much discussion about what the format for the 50th anniversary history of the NSRWA should be. Should it be a formal history published in a book format? Should it be a coffee table book? Should it be an extension of the video produced for the Association’s 40th anniversary? The final decision was to present the history in a series of short blog articles posted throughout the year on the Association’s website. In this format I decided to forego the usual citation of sources of a book or academic article and keep the articles free from academic style citations. However, I did not write this history off the top of my head, but through a thorough reading of a variety of sources on the events, places, and people who have contributed to the success of the NSRWA over its 50-year history. I have also talked with many people who have contributed to the success of the Association, both formally and informally, including past Executive Director Bill Stanton and current Executive Director Samantha Woods, and relied on my own experiences as an active volunteer herring counter, pontoon boat guide, and ambassador, giving presentations on the NSRWA to different groups and organizations in the watershed area.

The “archives” of the NSRWA provided a wealth of information about the Association through both its collection of newspaper and magazine articles collected over the 50 years of the Watershed’s existence and its collection of the Association’s newsletters, RiverWatch and more recently WaterWatch, over that same time period. The largest source of newspaper articles were in the local Mariner newspapers from Marshfield, Scituate, and Norwell and more recently from their web platform WickedLocal.com. There were many articles from The Patriot Ledger and several from The Boston Globe, and a scattering of articles from other papers including The Christian Science Monitor. There were magazine articles from South Shore Living and Yankee Magazine. Reading them all gave me an awesome appreciation for the amazing journey the NSRWA has taken over its 50-year existence. The Association also has an extensive collection of photographs of the people and events that have contributed to its success over the last 50 years. The NSRWA’s current website is also a valuable source of information, not only on current events and programs, but also on the history of the organization. Information files in local town archives and historical societies have supplied different perspectives on the relationships between the NSRWA and the towns in the watershed.