Following a path in the woods, your boot catches on a lone brick embedded in the ground. Walking along a pond’s shoreline, you notice an ornate set of stairs, half-submerged in sediment. Climbing atop a boulder in the middle of the forest, you find a century-old inscription. The South Shore’s industrial past is rich and varied, however a great deal of it has become obscured by the passage of time. You may be surprised to learn the histories of some of the region’s best-known walking places!

It depends on your age, of course. Older readers may actually remember when at least some of these changes took place! Below you’ll find a partial list of local parks and nature preserves with histories that may surprise you.

Also, be sure to check out NSRWA’s Explore South Shore Contest. This month we’re featuring properties with surprising histories — both within and beyond the watershed of the North and South Rivers. Please visit them, and then post a photo from your adventure to Instagram with the hashtag #ExploreSouthShore. Once a month, we’ll randomly select a winner from the posts to receive a prize package.

Have you heard of Colman’s Hill? Prior to 1914, it spanned the distance between Scituate’s Greenbush railroad station and Kent Street, including what are now the Widow’s Walk Golf Course and Driftway Conservation Park. The view from the top was spectacular! But through much of the 1900s, the Boston Sand and Gravel Company slowly hauled it all away. By 1963, when a dramatic fire destroyed the enterprise, over 14 million tons of sand and gravel had been removed. You can still catch glimpses of the view from the Signature Hole of the golf course, which is open to pedestrians in the winter months. Or climb Driftway’s Lookout Hill, just across the road. It’s hard to miss the remains of the old wharves in the Herring River, which flows into the North River a short distance away. Extend your visit with a tour of the property’s 1.65 miles of walking trails. On-site parking at 250 and 245 Driftway.
https://www.nsrwa.org/listing/driftway-conservation-park/
https://www.nsrwa.org/listing/widows-walk/

It is hard to believe that this park, located on both sides of the Indian Head River in Pembroke and Hanover, was once a sprawling industrial complex. The E. H. Clapp Rubber Works, founded in 1871, was the largest of its kind in the United States. The demand for reclaimed rubber was so high that by 1879, 75-100 workers kept the factory running day and night. Remains of this enterprise are not hard to find. The most obvious is on the Pembroke side, just down the trail — a large concrete structure, nearly covered in graffiti. While you’re there, check out the 4-mile trail network that extends along both sides of the Indian Head River, a major tributary to the North River. On-site parking at 243 Elm Street, Hanover and 418 Elm Street, Pembroke.
https://www.nsrwa.org/listing/luddams-ford-park-hanover/
https://www.nsrwa.org/listing/luddams-ford-park-pembroke/

You’d never know it, but this quiet woodland trail network contains a 0.4-mile section of historic railway. From 1868 to the 1930s, the Hanover Branch Railroad extended 7.8 miles from Hanover Four Corners, through South and West Hanover, across Rockland, to North Abington, where it connected with the Old Colony Railroad. E. Y. Perry, who operated a large tack factory in South Hanover, was largely responsible for the creation of the railway, which also serviced local shoe factories and the Clapp Rubber Mill. The Rockland section of the route is now the Rockland Rail Trail. In Hanover, both the 0.4-mile section within Nava-Stasiluk and a 2-mile section beginning at Luddam’s Ford Park are open to the public. Start at the parking area near 526 Center Street and follow the red and green blazes. Torrey Brook, a tributary to the Drinkwater River and part of the North River watershed, flows through the property.
https://www.nsrwa.org/listing/nava-stasiluk-conservation-area/ 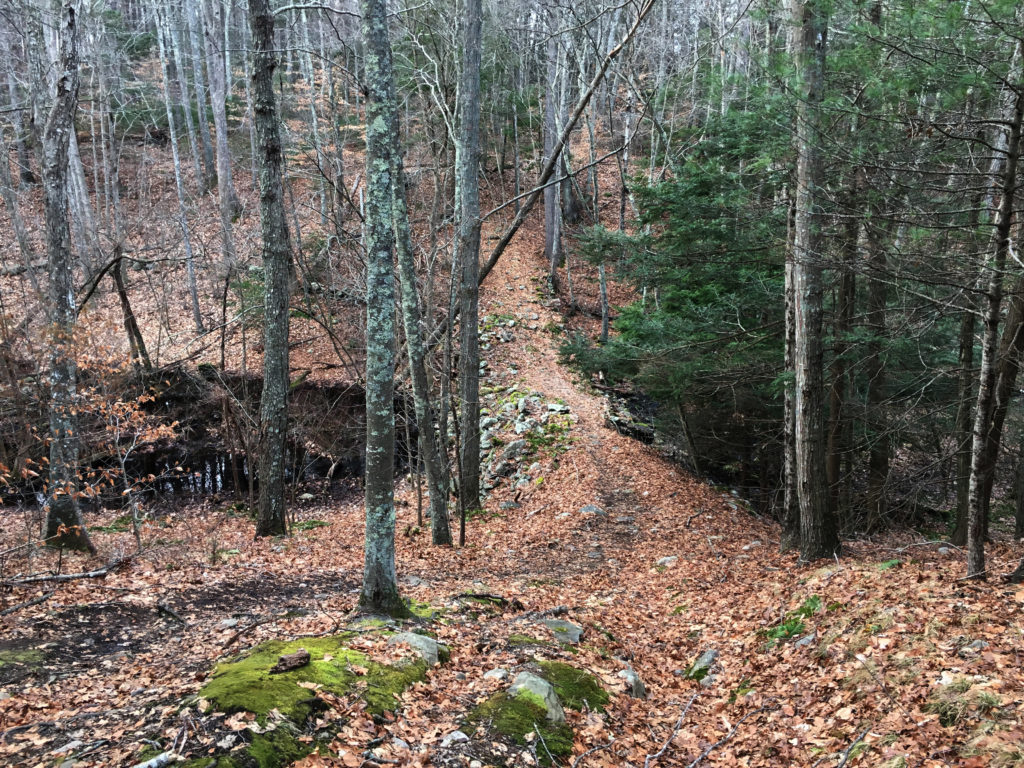 Many thanks to Hanson Conservation’s David Mansfield for the tip that led me to this most exciting discovery. Rocky Run was already one of my favorite properties, in part because of its gorgeous views, and in part because it contains a very large, old stone/earthen dam. Perhaps even more intriguing is Dwelly Rock. This enormous boulder stands to the right of the trail, just after the bridge of flat rocks that crosses Rocky Run Brook, heading toward Pembroke. Look for the long oval-shaped boulder, and climb up on top of it. Look closely and you’ll find the words “Dwelly 1875” engraved there. Why? Because a man named Dwelly once operated an iron forge nearby. You can continue around the Rocky Run loop, or extend your walk for a couple of miles into the Tucker Preserve and onward to Luddams Ford Park. Rocky Run Brook flows into the Indian Head River. Limited parking at 720 State Street, Hanson.
https://www.nsrwa.org/listing/rocky-run-conservation-area/ 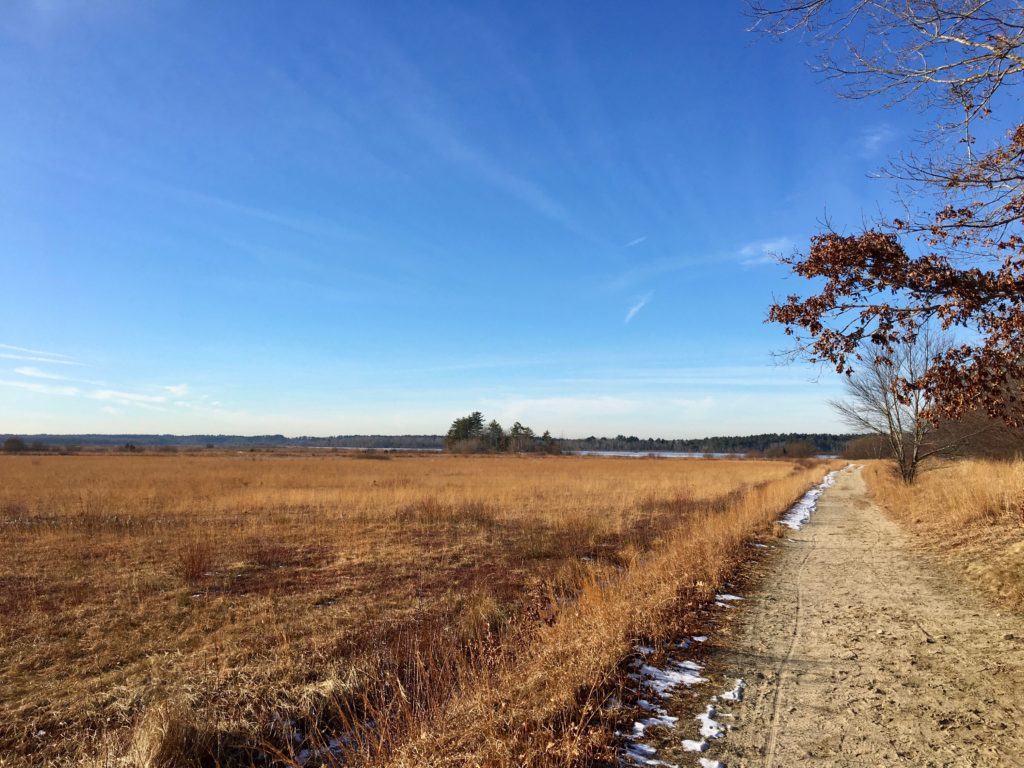 At first glance, this property’s recent history in cranberries is plain to see. But a century ago, it was an enterprise of an entirely different sort. In 1905, industrialist Albert C. Burrage began digging peat on site, to fuel what became his very successful Atlantic Dyestuff Company. The plant included four factory buildings, an office, a hotel, and 34 worker cottages, until an explosion and catastrophic fire in 1919 resulted in the relocation of the company. Two crumbling concrete structures remain on site, but otherwise, nature has commenced to take over. Stump Brook, which is part of the Satucket and Taunton River watersheds, flows southwest through the property. These 2,000 acres are now managed by the state for fisheries and wildlife habitat, as well as open space. There are more than 10 miles of public trails. On-site parking at both 382 Pleasant Street and 450 Elm Street in Hanson.
https://www.nsrwa.org/listing/burrage-pond-wildlife-management-area/

This is just the tip of the iceberg. The South Shore is home to so many properties with surprising histories. Other places to check out include Hingham’s Bare Cove Park, which used to be a Navy ammunition depot, Weymouth’s Osprey Overlook Park, which used to be a landfill, Weymouth’s Webb Memorial State Park, which once housed NIKE anti-aircraft missiles, and Chapman’s Landing in Hanover, the westernmost shipping hub for the North River-built steamship Mattakeesett. For details, visit www.nsrwa.org.

Kezia Bacon’s articles appear courtesy of the North and South Rivers Watershed Association, a local non-profit organization devoted to protecting our waters. For membership information and a copy of their latest newsletter, contact NSRWA at (781) 659-8168 or visit www.nsrwa.org. You will also find 25+ years of Kezia’s Nature columns there. For more information about the Explore South Shore 2021 Contest, visit https://www.nsrwa.org/get-outdoors/explore-south-shore-2021-contest/